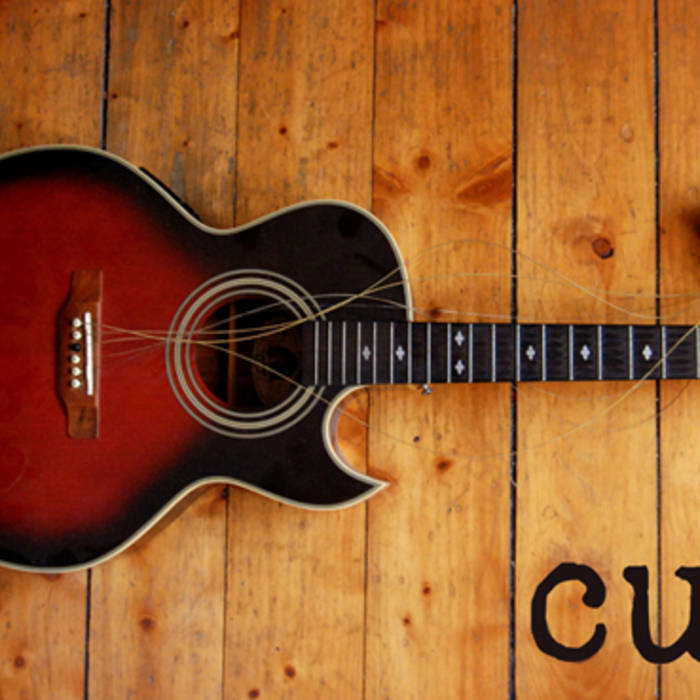 
Cubs "Willowfield" E.P. Reviews
=========================
Don't be fooled by the knackered guitar on the cover of Cubs' new EP for Rusted Rail. Although their website says it was a casualty of the sessions that yielded Willowfield, it's difficult to imagine it was victim to any kind of rock 'n' roll shenanigans as, for the most part at least, the collective keep things quite gentle. Made up of musicians from The Driftwood Manor, United Bible Studies, Phantom Dog Beneath The Moon and others, Cubs dot their guitar miniatures with various movie samples, ranging from The Straight Story to The Hired Hand and cult English drama series The Prisoner. The samples provide atmosphere - not that the songs lack it on their own - and prompted no small amount of Google bashing on my part, although I got the Grizzly Man one straight away. There are hints of Sun City Girls in the wails that swirl around the title track, and the inclusion of instruments like bodhran and bouzouki in the mix further adds to the Eastern atmosphere on songs like 'Passages From A Drunken Notebook' and 'With Candles We Walk'.

Ocassionally the collective allows external sound sources to invade. The subtle, muffled bumps that tip-toe through 'When Skies Split Open' are actually fireworks exploding in the background and 'Hollycroft' is full of clunks that sound as though the tape is being rewound mid-track. This is also the first evidence of dissonance becoming part of the Cubs sound - the screech and squeal of a melodica and what I think is a harmonica shows up now and reappears regularly hereafter before things come to a head on 'The Last Day Of Spring' whose epic sheets of guitar noise all but overwhelm the dainty finger-picking these musicians are so skilled at. Werner Herzog's haunted voice opens 'With Candles We Walk', meaning the thoroughly absorbing Willowfield ends on a suitably chilly note. - Foxy Digitalis

..more experimental in its textures "Willowfield" contains ten tracks featuring Aaron Hurley amongst a host of others including Eddie Keenan (bouzouki) and James Rider (acoustic guitar). After the title track, complete with vocal samples that set a mood of sadness, regret and forgiveness, "Lowering of the Ropes" sees guitar, mandolin and bouzouki dancing together creating glorious melodies that sing out across the room, carrying the beautiful harmony vocals to another realm. With harsher sounds and spoken word running through it "Foxglove" sounds like it could be part of the Village Thing imprint from the 70's, whilst "Hollycroft" is a brief slice of ghostly ambience that paints strange pictures in your mind.

After the pastoral sweetness of "Passages from a Drunken Notebook", more spoken word samples can be found on "Sun Plots" another eerie slice of Psych-Folk that glistens with vitality before the mood is changed with the more ethereal and experimental "When Skies Split Open" one of three tracks to feature the lovely vocals of Cecilia Danell. Equally awash with sonic textures (and a spoken word sample), "Stonyford" threatens to drift away in a cloud of echo/effects but is grounded by the acoustic melody that walks beneath the noise, whilst "The Last Day of Spring" seemingly ties all the elements of the collection together perfectly to create my favourite track on the disc. Finally, "with Candles we walk" mirrors the opening track in its sounds taking the listener full circle and completing yet another damn near perfect collection. -Terrascope

"The acronym Cubs fleetingly appeared last year on the release "The Whispering Woods", a disorganized collection of material recorded in different places and at different times by many artists themselves active in the area of out-folk, psychedelia and experimentation. Given its nature, this work could appear a bit offhand, but here the real Irish super-group put together by the label Rusted Rail makes itself felt with a series of ten short sound sketches, evidence of the development of an open-ended art project in constant transformation.

Aaron Hurley (Phantom Dog Beneath The Moon), Cecilia Danell, Eddie Keenan (The Driftwood Manor), Paul O'Reilly, James Rider (United Bible Studies) and Keith Wallace (Loner Deluxe) form the line-up of the project on the "Willowfield" EP of twenty-three minutes, during which oblique distractions recur between the acoustic and the analog, balanced between lulling melodies and hypnotic pieces of space.

Evocative arpeggios from bonfires and spectral environments coexist well with derailments and noise-psych twists, while the participation by Eddie Keenan and Cecilia Danell even forges a couple of unexpected songs in the form of limpid ballad "Lowering Of Ropes", while confessions under the subheading of "Hollycroft" in its minimalist softness calls to mind the first 'Mi And L'Au', made alienating by a low-fi organ.

The increasingly organic character of the short pieces included on "Willowfield" and the increased propensity of the collective sound can be hailed as a step towards positive change and continuity for a particular project that is increasingly used to summarize the feelings that animate the varied facets of the "folk on the edge" that revolve around the praiseworthy Rusted Rail. - musicwontsaveyou.com