When The Weather Clears

by Songs of Green Pheasant 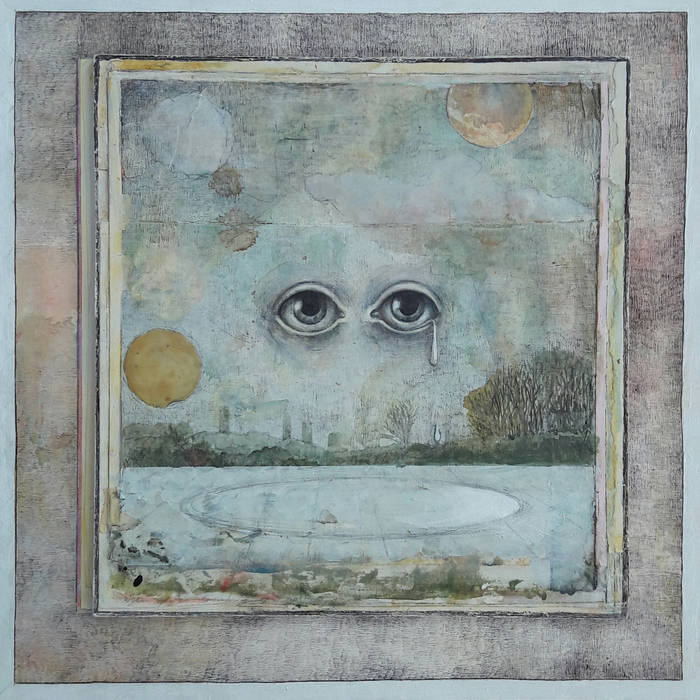 Rusted Rail is proud to announce the release of 'When The Weather Clears' by Songs of Green Pheasant, the follow up to 'Soft Wounds', his acclaimed 2012 release for the label. The musical project of Stockport-based Duncan Sumpner, Songs of Green Pheasant has delivered a truly immersive collection of songs, an album of foggy impressionism. Ritualistic mantras emerge from hypnotic grooves whilst eerily evocative nocturnal melodies are subsumed by cloudy washes, as sonic storms beset the gentle meanderings.

The album pivots around the dreamfolk-pop gem of 'Hello', as Sumpner's soundworld unfurls enveloping shrouds of levitational vocals over rustic underpinnings and pealing trumpets float over homehewn rhythms, tethering these ghostly transmissions to earthly roots. The 6-panel cardboard CD sleeve features sumptuous surrealist artwork by Sumpner while 'When The Weather Clears' is accompanied by a download of a collection of previously unreleased works-in-progress from the 'Soft Wounds' era of Songs of Green Pheasant, called 'Injury Time'.

"Sounding like a well-rehearsed band playing joyously together this project is, in fact, the work of Duncan Sumpner, a Stockport based musician with an ear for melody, the delicious tunes wrapped in hazy washes that lift them lightly to drift amongst the landscape like soft, beguiling clouds.

Right from the off “Garden Hook” reels you in bringing a feel of nostalgia and longing through its slowly revolving chords and strings, hints of percussion and drone giving the song a ritual feel that is fuzzy and warm. Following a similar path, “The Wormwood Star Falls” has some glorious vocals that flutter above the strummed guitar before drums and distortion take the song ever higher sounding like BJH if they were a Dream Pop band. Suitably psychedelic the tune is a standout for me setting the tone for that which follows.

With a slightly fuzzy centre that wraps around you like a favourite cardigan, “Sisters of the District” is just beautiful, whilst “Northbound Trains” has the air of Simon and Garfunkel about it, sweet harmonies and an innocent charm that is easy to enjoy and lasts long in the memory.

Light and airy, “Hello” is a fabulous pop tune that is happy and filled with sweetness, a tune that will put a skip in your step and a smile on your face, much needed in these difficult times, the following “I” taking the listener down a more sombre path, a slow and droning tune that reminds me of Gorkys Zygotic Mynci, with its awkward, in a good way, harmonies.

Over ten songs the quality of the tunes never diminishes, the whole album flowing beautifully together, imagine drifting down a river as the sun sets just watching the scenery glide by, all this personified by “In Very Truth” the opening of which reminds me of Kevin Ayers before it sets of down a long rambling path, the journey far more important than the destination, the hypnotic riff and birdsong allowing your mind to drift where it will, timeless and delightful at every turn.

Finally we arrive at “Redundancy”, an Eno-esque piano calming that rambling mind giving us time for re-entry before a final sudden ending.
As with all the best music this album takes a while to settle needing a few listens before all the layers are revealed, never less than enchanting, a journey worth taking." - Terrascope


"The album is a dreamy affair, with multi-layered vocals not unlike those on, say, a Fleet Foxes or C. Duncan record. There are some beautiful layers of instrumentation across the album, which particularly stand out during tracks such as ‘The Wormwood Star Falls’. There’s also, sound-wise at least, a definite sense of delving into the past throughout all the songs – generally, the overall feel is of a folk/pop album, but occasionally we stray into the realms of psychedelia (‘Sisters of the District’, ‘Lucy Says’) or dreampop (particularly on ‘I’).

Not for a moment would you suspect that Songs of Green Pheasant is actually the work of just one man – the instruments sound well connected and the harmonies portray the feeling that there are at least four or five individual voices in the room. The tempo is fairly relaxed pretty much the entire duration, and rarely do songs become elevated in terms of either volume or tempo, which makes for an album which you can really sink into.

Sumpner clearly understands how to build a song in terms of introducing individual instruments – and also removing them – to create a fusion of darkness and light within a track. Potentially political decisions within a normal band structure such as “We don’t need the drums during the second half” are mere footnotes within the context of a solo project – and as a result, instruments can change several times through a song.

‘Northbound Trains’ bears the hallmarks of an artist who could only be from the North of England. It’s a beautiful track, mellow and reflective. Only during ‘Hello’ does the tempo rise a notch – and also heralds in a wave of optimism. Elsewhere, ‘Candlemas Day’ is a slower, emotional track and is followed by the delightful ‘In Very Truth’, which could almost be an early Bob Dylan outtake.

When The Weather Clears makes for an interesting and quite emotional listen. Sounding like it’s been recovered from a dusty basement box with along with odds and ends from the late 1960s, it doesn’t actually sound at all out of place in 2020. In fact, 2020 is all the better for it." - Sic Magazine


"There are names that we did not believe to come across again: Songs of Green Pheasant emerges from the past in the halo that envelops memories as pleasant as they are fleeting. It's like remembering a summer romance that tastes unfinished.

Between 2005 and 2007, Duncan Sumpner signed a triplet of albums for FatCat Records including the very handsome Gyllyng Street (2007) in the form of a British replica and openly modest in means and form, but not in ambition, orchestral, slowcore by Codeine or Red House Painters . These three handcrafted albums shone with the luminous
sensitivity that a teacher from the North East of England could display, writing, composing, interpreting the texts and music that his heart dictated to him in his spare time. A few years later, we met SOGP again on the Irish home-made label Rusted Rail during the time of Soft Wounds (2012) who abandoned gloom in favor of bucolic recklessness.

With When The Weather Clears, the author invites us once again to enter his humble home: we come on tiptoe, for fear of embarrassing, of disturbing this man who gives himself up to confidences without false modesty but with sincere benevolence. Like a domestic cat in his favorite hunting territory (between the kitchen and the sofa),
Duncan Sumpner glides from one instrument to another with agility in his home-studio. Even if sporadically a few friends come to play for an arrangement of strings and brass (drinking beers and remaking the world too), it is above all a solitary work in the form of a nocturnal outlet. You can hear the noises of everyday life and the doubts that arise when the day declines. The voice of the Englishman floats on frail melodic skiffs which know neither the syntax of pop-music nor the pangs of hippy psychedelia. Without refrain or verse, the songs force
themselves to diffuse a comfortable melancholy inviting to reverie. There is no doubt that the music of Songs Of Green Pheasant is marked by the influence of Mark Hollis , Nick Drake, The Doors or even The Durutti Column , but without taking the trouble to formalize them. The result is inherently wobbly and elusive just as much as it is personal." - Sun Burns Out

"Duncan Sumpner, the man behind Songs of Green Pheasant, clearly holds to a ​“quality over quantity” mindset. It’s been five years since his last releases, a pair of self-released limited edition mini-albums, and eight years since his last title for Rusted Rail, 2012’s excellent Soft Wounds. Which just means that whenever a new Songs of Green Pheasant album is eventually released, then it’s time to set everything else aside and lose yourself in Sumpner’s brand of lush, dreamy folk music.

“The Wormwood Star Falls” is Sumpner at his very best, with gauzy, fuzzed-out instruments (acoustic guitar, accordion) forming a patchwork quilt held together by spectral, twilit drones. Sumpner’s multi-tracked vocal harmonies drift across the surface of the song, which grows increasingly full, even riotous, thanks to a loping bassline, shards of guitar noise, and clattering percussion.

An immediate comparison might be Fleet Foxes’ earlier material, were Robin Pecknold et al. recording in a dilapidated cabin somewhere in the English countryside. Both artists’ music possess a similar lilting and homespun quality, though Sumpner delves more deeply into pastoral psychedelia in his songs (see also ​“Sisters of the District,” ​“Lucy Says”). All comparisons aside, the resulting music is as otherworldly and bizarre as it is intimate and down-home.

It may very well be another five years before Sumpner releases another album, if not longer, but who cares? “The Wormwood Star Falls,” along with the rest of When the Weather Clears, is ample proof that new Songs of Green Pheasant music is always worth the wait." - Opus Zine


"Over the years Galway imprint Rusted Rail have specialised in putting out a mottled array of homespun sounds. Their latest release is a textbook case in point. Eight years on from his debut release on the label, Soft Wounds, When The Weather Clears by Duncan Sumpner aka Songs of Green Pheasant is another batch of wonderfully nocturnal paeans that double as a perfect soundtrack to taking cosy refuge from the growing winter cold. Evoking And Nothing Turned Itself Inside Out-era Yo La Tengo, ‘Lucy Says’ is but one highlight here." - The Thin Air


"Along the course of 'When The Weather Clears', we find gentle bucolic glimpses and drifts of soft psychedelia, but also more intricate electrical connections, field recordings and occasional acid twists." - Music Won't Save You (Album of the Week)


"The centrepiece to this album is the gorgeously soft, atmospheric and melodic single ‘Hello’. Fans of warm, fuzzy folk pop will love this." - Norman Records


"When the Weather Clears, the first new album in almost a decade from singer-songwriter Songs of Green Pheasant, is released tomorrow, Friday December 4, via the independent Galway label, Rusted Rail. Songs of Green Pheasant is the stage name of Duncan Sumpner who is based in Stockport, Greater Manchester. His previous release on Rusted Rail was 2012's very fine Soft Wounds, which showcased his intimate folk style, with touches of Paul McCartney and Syd Barrett." - The Galway Advertiser

MF DOOM is given his flowers, plus appearances from MC Jada Imani and Stanley Ipkuss