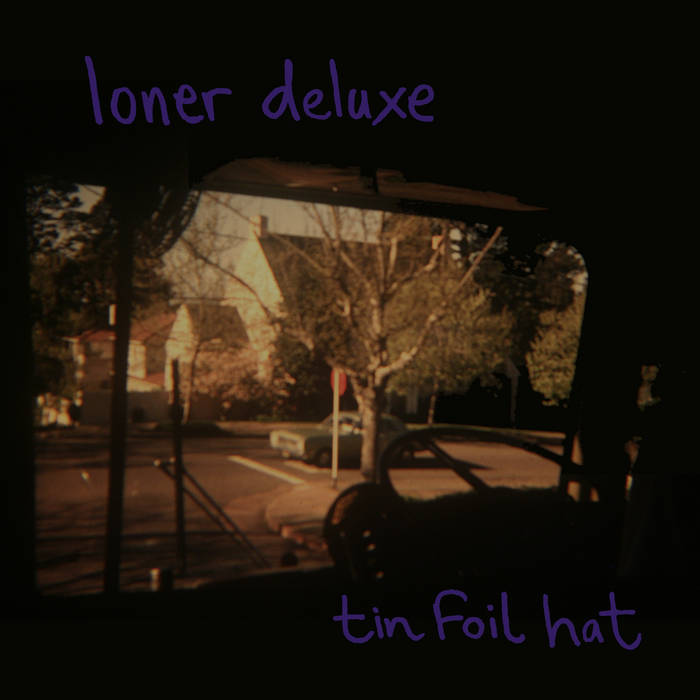 Loner Deluxe
'Tin Foil Hat' Digital Cassingle
(RR51)
Hot on the heels of 'Field Recordings' comes a new Digital Cassingle/extended player from Loner Deluxe called 'Tin Foil Hat'. Featuring a title track decanted from the current album, this release is also home to a Krautrocky garage-rock stomper captured during the sessions for the 'Field Recordings' ('Sister Rainy Day'), and two brand new songs - a hypnotic slice of banjo-splattered dubby groove science
('You Know It's True') alongside a cover version of a song by labelmates The Declining Winter ('Housing Tract Blues').

Video for the title track made in collaboration with tinyEPICs - www.youtube.com/watch?v=_kw0Yy5o-NQ

The sleeve image is from a set of old holiday slides Loner Deluxe discovered in an Nottingham junk shop over a decade ago - photographer and location unknown...

"At times feeling like a mixtape compiled from the shelves of a discerning connoisseur of early-1990s-to-mid-2000s Matador, Merge,
4AD and the like, Field Recordings should appeal to those who really found their ears and record buying addictions in such a period...
we’re spun through murmurous Folk Implosion chugging and buzzing; dreamy blends of Madder Rose’s embryonic singles and Tanya Donelly’s unvarnished Sliding and Diving EP; wobbly warm nods to The Breeders’ Title TK; the twangy experimentalist corners within Yo La Tengo’s I Can Hear the Heart Beating as One; imagined lost Grandaddy-meets-Sparklehorse b-side hook-ups and Slowdive-soaked shoegaze deconstructed with banjo and balmy co-ed tones."
- Concrete Islands

"A beautiful collection of psychedelic folk frenzy with the touches of dub (check out that reverberated/delayed/echoed production in Off
The Grid) and krautrock that has both quite honest melancholy in it but also quite a good deal of cosmic minimalistic repetition with
some nice creamy synths on the top. There's a motoric almost new waveish feel to many tracks like in Tin Foil Hat that draws quite a
good bit of attention." - Felt Hat Reviews

"There’s a lo-fi feel to the recordings throughout – and a fuzzy, slightly stoned feel...Fans of seventies early electronica and lo-fi will be
in their element."- SIC Magazine

for the record, Loner Deluxe were: