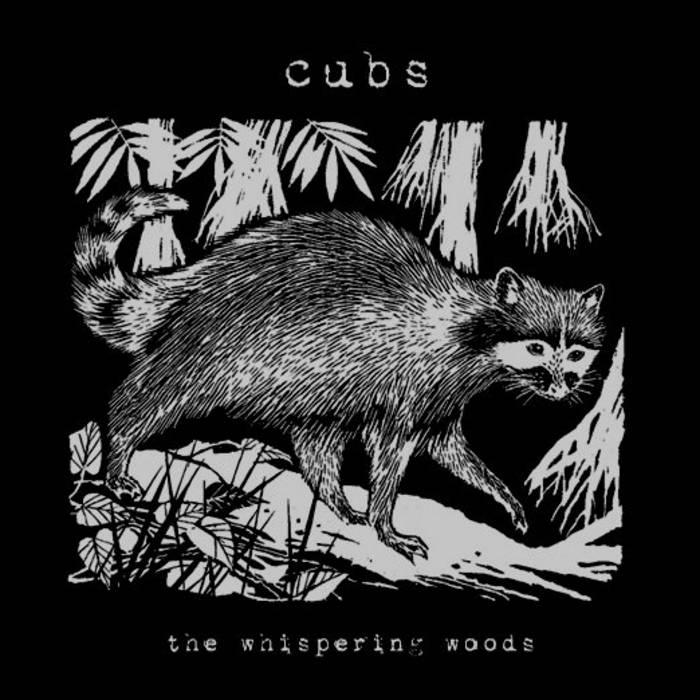 "Rusted Rail and Deadslackstring are proud to announce the release of "The Whispering Woods" by Cubs - a recording project featuring members of Phantom Dog Beneath The Moon, United Bible Studies, C Joynes, Plinth, Agitated Radio Pilot, Yawning Chasm and other travellers on the folky-margins. Featuring eleven musicians and thirteen songs, the album was recorded in Ireland, England and Africa. Born out of improvisation, Cubs have delivered an album album of 21st century psych-folk stylings comprised of late night lysergic lullabies, occasionally electrocuted acoustica and cosmic composition, while also finding time to take in spectral strings, backwoods progressions and tripped-out trad. The album is housed in a beautiful hand-assembled sleeve."

Featuring members of United Bible Studies, plus other folk, in various combinations and recorded whenever possible in various locations including Dorset, Ireland and Gambia, this album is a master class in acoustic based eeriness, folk meeting psychedelia in a dark forest and loving every minute.

Blending acoustic guitar and mandolin over the sounds of running water, "Stonewater" is a short and beautiful opener, that sets the scene. Following on, the slightly more experimental "Impressions of Chloe/Hidden valley" flows gently, using a tin whistle to great effect, the track part tradition, part drone.

Although mainly acoustic in construction, the album has a smattering of electricity running through it. This first comes to light on the title track where an e-bow snakes through the tune, the vocal sample adding poignancy to the free form sound. Much more traditional in nature, "Fortis Green" is a jaunty tune that includes a Mandobird, (something I had to look up, very nice they are too).

Of course it is the huge range of instruments on this album that is one of its joys, the sounds of Tenor Guitars, Accordion, Whistle, Dulcimer, Mandocello and Bouzouki, plus the more usual instruments, mixed together in wonderful ways, meaning that each song has a different flavour, whilst the whole album works perfectly as a whole.

Conjuring up images of its name "Frozen Lake" is a haunting tune played on Cello, Mandocello and Bouzouki, the song perfectly poised on the icy surface, whilst the drifting nature of "Watching the Fireworks" allows the listener to lie back, the sounds washing over you like twilight falling on a summers eve.

Over thirteen tracks, this album never fails to impress, emotional, traditional, experimental and just plain wonderful, an album that works on many levels, that can be listened to intently or allowed to drift away in the background, that needs to be heard.
Terrascope

CUBS are one of the branches of the seemingly infinite tree of modern Irish free-folk; featuring members of United Bible Studies and Phantom Dog Beneath The Moon (among many others), the debut album The Whispering Woods (Deadslackstring / Rusted Rail) is a delicate concoction with the sun on its back and a gentle, shifting vibe. It's a largely instrumental record with an array of sweetly strummed and picked acoustics, occasional spoken interludes, and a hazy, welcoming bonhomie. Most of the tracks are short, feel largely improvised, and rotate in joyous, slightly psychedelic circles. Yet that's not to say it's all calm sailing. Witness 'In Cubs There Is No North or South', a spooky, lilting piece that's suddenly rent with an electric jolt and disembodied voices. This really is tremendously good and shows that, however massive the output for those in this collective, there's never a 'will-this-do' dip in quality.
Shindig Magazine

We might just build a whole section in the shop built around this album, free-folk anyone? Incredibly natural and earthy sounding album that spans full-blooded vocals to rusty sounding instrumentals. Comprised of 11 musicians bringing members of Phantom Dog Beneath The Moon, United Bible Studies, C Joynes, Plinth, Agitated Radio Pilot, and Yawning Chasm amongst others, it's a beautiful piece of work and that's just the handcrafted sleeve. If we were to make some minor comparisons you might hear us mention John Fahey, Peter Broderick but comparisons wouldn't really do it justice; we'd rather you just listened.
Plugd Records

This is the newest release on Galway's Rusted Rail imprint and is a collaboration between members of Phantom Dog Beneath The Moon, United Bible Studies, C Joynes, Plinth, Agitated Radio Pilot, Yawning Chasm amongst others. It flits around on the folky margins, indistinct rural acoustic plucking married with stretched out electronic drones, dreamy zither/dulcimer, violins weeping. Some tracks are charming back porch instrumentals, some with spoken word, some with full on singing. One of those albums that has an incredibly natural feel to it, like a bunch of people setting up and playing just for the hell of it. Often as on the stunning instrumental 'Fortis Green' this adds up to something rather beautiful and heartbreaking. Comparisons could be made to the American cosmic psych folk movement, the likes of Six Organs of Admittance and MV and EE spring to mind. A charming record and with eleven musicians present there is a variety in sound. Sometimes less is more but on occasion more is more. As always with Rusted Rail, beautifully packaged in a fold out, screen printed sleeve.
Norman Records

I can't resist a band called Cubs. How could I? Add to that a lovely packaging and a super cute cover painting and I'm sold. Yes, my first impressions on this albums were huge. Then I learned that Cubs is somewhat of an all-star band with members from nearly every act that ever touched Rusted Rail records. Our favourite Radio Pilot is present, and I can't often say no to his music. Clear lines can also be drawn from this project to Phantom Dog Beneath The Moon, Plinth and Yawning Chasm, to name a few. Anyway, a total of eleven musicians were involved in writing and recording these 13 tracks. All this and more can be learned over at Rusted Rail's official site.
With all the aforementioned acts in mind, you could get a so-so clear picture of how Cubs sound... It's eerie and laid back at the same time. Electroacoustic folkadelica with focus on the acoustic. Beautiful guitars, great flutework... Dulcimer, mandolin, cello, mandocello, banjo, bouzouki, samples, accordion... I like to think of it as something like Tunng meets Agitated Radio Pilot. It's experimental and new, yet very familiar and safe. Most of the tracks are instrumentals, which isn't as boring as I thought it would be with such a vast selection of instruments. Vocals do appear here and there and singing parts are my havens. Yeah, I could wish for more vocals but it's not really a hangup. As you might expect, the music is flawless. These guys know folk and how it's should be done. And if you're somewhat familiar to the artists before, you might now they're also masters of putting up huge atmospheres that works almost as canvases, or television screens, in your mind. The thoroughgoing mood is bleak. Nostalgic maybe. Certainly melancholic. With a touch of hopefulness. And they're called Cubs and has a super cute cover painting so there's no way to resist this.
The Shadows Commence

Hitting the streets last Friday, the latest, the second, and the first full-length from Cubs, following their 'Stonewater' EP of nearly four years ago. With nearly as many musicians as songs (11:13), derived from Galway's Deserted Village/Rusted Rail scene (Phantom Dog Beneath The Moon, Plinth, United Bible Studies, ad naseum), the album manages to disembody its sounds through this small society of players. Overlaid with the hippie enlightenment of a sun-fried head, title track "Whispering Woods" hacks its own mystic return with glitchy resonance and 21st century eschatology. The unmistakable voice of Aaron Hurley (almost) book ends the disc with lyrical tracks like two Phantom Dog bonus tracks, "Impressions of Chloe" with its two part vocals and accordion like some half-speed raga, and "The Great Frost" a timid conversation with twinkling strings lassoed by a stuttering electric tread. Though not nearly as mysterious as the collections of UBS or ethereal as Plinth's nocturnes, 'The Whispering Woods' has all the aura one comes to expect from these releases, accomplished through tried-and-true folk structures ("Fortis Green", "Blackberry Lane"), atmospheric post-rock ("Lunar Electrification Program", "Watching the Fireworks"), and plucky psychedelia ("The First Time of Asking", "In Cubs There is No North or South"), all clustered in movements across the disc's two "sides" to push the album's proper 40-minute duration into its own phenomenal duration - both fleeting and eternal, yet making no demands. CD comes in a handsome, silver-printed arigato pack.
Animal Psi

Cubs is a communal project with bands and individuals from the Rusted Rail label rooted in Ireland, but recorded also in North Ireland, England and also Gambia. This sounds like a quiet mood-provoking jam of improvisations when combining different picking instruments like tenor guitar, bouzouki and such with electric guitar textures, accordion, and improvisations on mandolincello or cello besides some other additional layers of instruments like glockenspiel, with only a spare amount of recordings of spoken word contributions and only a little bit of singing. The album hangs thus moodily together and convinces perfectly like a musical concept.
The band released an EP before, this is the first full release. For this release Cubs were David Colohan, Aaron Coyne, Kevin Flanagan, Aaron Hurley, Chris Joynes, Vicky Langan, Scott mcLauglin, Paul O'Reilley, James Rider, Michael Tanner and Keith Wallace. This includes members or entire entities of the bands and projects of Phantom Dog Beneath The Moon, United Bible Studies, C Joynes, Plinth, Agitated Radio Pilot, Yawning Chasm and like the label says "other travellers on the folky-margins". Many of these bands have other releases on the label.
Psychefolk

8. Neachtain’s Snug
9. The First Time of Asking
10. Lunar Electrification Program
11. In Cubs There is No North or South
12. The Second Time of Asking
13. The Great Frost

Recorded whenever and wherever we could in Ireland, Northern Ireland, England and The Gambia, Africa.

All the players wrote their own parts

Dave Colohan and James Rider recorded track 4 in Belfast, Northern Ireland where James also recorded his electric guitar parts for track 11.
Chris Joynes recorded his guitar on tracks 9 and 12 in The Gambia, Africa.
Scott McLaughlin recorded his cello on tracks 6 and 12 in Huddersfield, England
Mike Tanner recorded his dulcimer on track 5 outdoors in Dorset, England.
Keith Wallace recorded his piano part on track 10 while snowed in at the foot of the Dublin mountains.