The Statue of the Hunter is Lost at Sea

by Phantom Dog Beneath The Moon 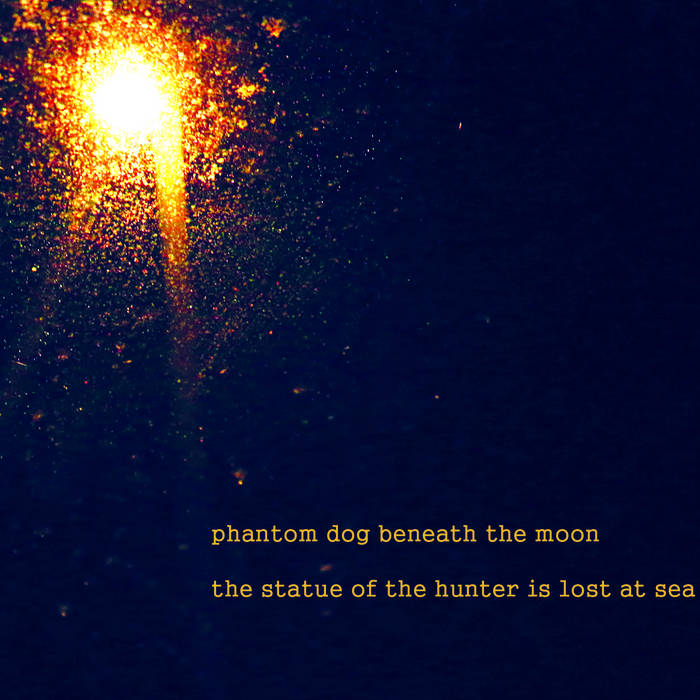 Rusted Rail is proud to announce the release of "The Statue of The Hunter is Lost at Sea", the third album by Phantom Dog Beneath The Moon. This album represents Phantom Dog's first new material since 2010's critically-acclaimed "The Trees, The Sea in a Lunar Stream". Scratching an almost seven year itch, the duo of Aaron Hurley and Scott McLaughlin have arguably defined a new form of musical struggle the "difficult third album" syndrome. It's a battle they have won and it was worth the wait. This nine-track album finds Phantom Dog Beneath The Moon exploring sonic territory inhabited by rivers, snowy graveyard trees and dark nights of the soul. These velvet lullabies meld avant-folk moves with a contemporary-composition sensibility, suggesting hazy transmissions over a fog-shrouded lake, wading in the same brackish waters as Bark Psychosis and latter-era Talk Talk.


Phantom Dog Beneath The Moon have delivered a selection of songs so intimate it sometimes feels like eavesdropping on a late night conversation, as the duo and their collaborators delve into impressionistic interludes and glimmering nocturnal musings, with Hurley's high, plaintive voice floating atop a shimmering cloud of haunting drones and lifted by transcendent codas. Along the way there are traces of rural psychedelia with one eye on the sky, as the album veers from misty acoustic confessionals to full-on shoegaze blowouts - this is the sound of a band at peak performance. Shindig Magazine had to invent a new genre to describe their previous album - they called it "Folk-Gaze" - and it is this confluence of songs straddling sonic space somewhere between handmade and high-fidelity, between late night and the break of dawn, that is the high watermark of "The Statue of The Hunter is Lost at Sea".


REVIEWS
++++++++
It has been seven years since the last album from Avant-Psych folk outfit Phantom Dog Beneath the Moon, and I, for one are delighted by their return, especially as this album ticks all the right boxes in terms of inventiveness, quality and atmosphere. After a brief slice of mood-setting spoken word, “King Rabbit Stalks Lowlight” offers a autumnal guitar and hidden drones, voices harmonising together beautifully, kinda like early Tuung meets seventies acid folk, the song alive with possibilities. With distortion and tension a-plenty, the title track creeps under your skin completely, the noise rolling in like a fog across the hillside changing the scenery adding mystery and disorientation until the sun breaks through again in the shape of “Birds In Thy Chimes” a beautiful tune brought to life by the vocals of Aaron Hurley and Andrea Fitzpatrick, a slow haunted Cello wrapping itself around the tune perfectly. Equally wonderful, “All I meander Even Ever” could be a companion piece to the previous piece so closely are their sounds linked, whilst “A Riverscene Amended” is a coiling mass of pale drones lit up by spoken word and drifting vocals that illuminates like pale winter sunlight.


Over nine tracks the mood is one of darkness giving over to reflection and light, a whiff of hope barely felt in the early morning gloom, another day heralded by the first bird of morning and to me this is perfectly summed up on “This Is No Poet”, my favourite tune on the album and one that I will return to often. Of course, although I have a favourite does not mean that the rest is not as good with “Snowy Vague Trees In A Graveyard” being as impressionist as the title suggests, as if not quite fully formed with the following “A Glimmering” rippling with melody and rustling percussion kinda like Galaxie 500 in an ancient forest, the whole album brought to closure with “Blue Velvet Lullaby”, a seven minute summation of all that has gone before but with the volume knob turned way up and guitars set to stun and then some, the final chapter of a particularly fine album, fans of Gravenhurst, Thirty Pounds of Bone or Galaxie 500 should definitely investigate. - Terrascope

1. King Rabbit Stalks Lowlight
2. The Statue of the Hunter is Lost At Sea
3. Bird in Thy Chimes
4. All I Meander Even Ever
5. A Riverscene Amended
6. This is No Poet
7. Snowy Vague Trees in a Graveyard
8. A Glimmering
9. Blue Velvet Lullaby

"Something in the way that folk songs become swathed in wisps of shoegaze and abstract drones is mysterious and ineffable. It’s special stuff! " - Norman Records

"It may also be the Dog’s most challenging, ambitious, work to date. Yet, given time, its sonic textures and atmospheres, left-field indie guitar work, and folkloric lyrics, draw the listener into a strange, beguiling world, one where every twist and turn can spark all kinds of associations and images in the listeners imagination. Here there is ambient music (‘A Riverscene Amended’), haunting Gothic-indie (‘King Rabbit Stalks Lowlight’), and epic, post-Radiohead alt.rock (‘Blue Velvet Lullaby’)." - Galway Advertiser