by A Lilac Decline 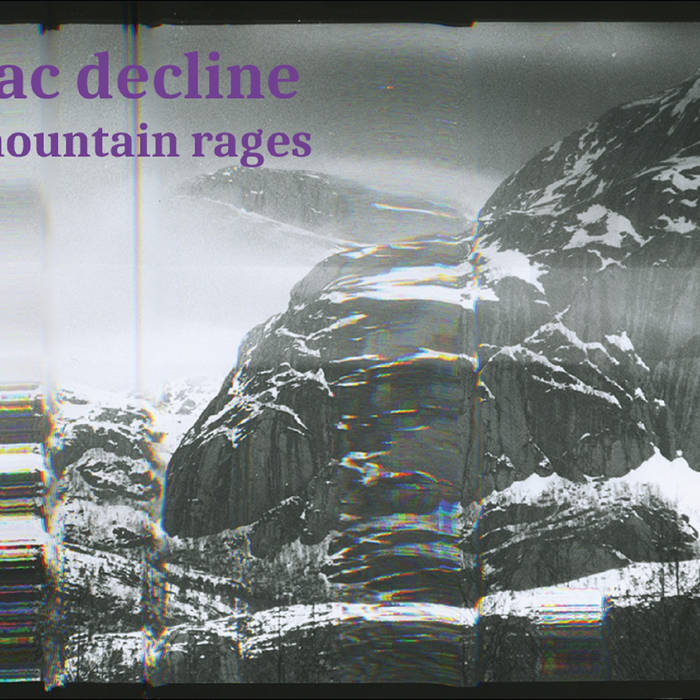 Rusted Rail is pleased to announce the release of "The Mountain Rages”, the debut album by A Lilac Decline, the anagrammatic musical pseudonym of visual artist Cecilia Danell. Originally from Sweden but resident in Ireland for over a decade, Danell is a member of fellow Rusted Rail acts Cubs and Loner Deluxe. “The Mountain Rages” came together during sessions in the spring and the wet summer of 2016, recorded via one microphone and a bunch of borrowed and found instruments, in an attic room in Galway and during impromptu sessions in a remote cabin in Norway. Whilst sequestered in the Norwegian cabin with no instruments to hand, Danell recorded two songs ("Winter Wanderer" and "Theremin Song") variously on some empty vessels with a tablespoon and with an online digital Theremin piped through salvaged speakers - see if you can spot these extreme home-recordings. Snatches of shortwave radio and field recordings also imbue the sonic fabric of the album with a sense of wilderness. A Lilac Decline’s dreamfolk is haunted by owls and warmed by cracking cabin fireplaces which lends the album a rustic, handmade aesthetic. On a couple of tracks waves of melody emerge from the fog of homemade shoegaze haze to bestow an ethereal aura upon this wood-wandering forest folk music. This album is released on cassette with a download code.


Watch the music video for "A Fine Day At Last" here - www.youtube.com/watch?v=LOPzOg7Vuvc

Watch a video for the title track here - www.youtube.com/watch?v=uReVHkwdXOs&t=3s

Opening with the sound of rain, “Raindear” quickly becomes a ripple of acoustic loveliness, a beautiful song lit up by the sweet vocals of Cecilia Danell, whose album this is, playing everything herself, creating a collection of delightful tunes. On, “Sparrow Sorrow” the guitar is augmented a simple keyboard line that really elevates the song, whilst the title track has a gracefulness that reminds me of Allysen Callery, that is until a distorted electric shoegaze guitar bursts in making you grin with surprise, as if Dinosaur JR had just joined the party.

Achingly tender, “Galaxies Away” is a highlight for me, the sparse arrangement and gently treated vocals adding an air of magic and wonder to an already potent song that has the power of a crackling late night fire, that magic also cloaking “Red Gold Is Gone” another fine tune that stops you in your tracks. To end side one, “Winter Wanderer” has the sound of owls and a primitive heart, the tune recorded in a lonely Norwegian cabin using various empty bowls and cups and voice, the music having a ghostly, hazy beauty that is hypnotic and easy to get lost in.

Continuing the musical alchemy on side two, “Tunnelling Through” is fully formed and engaging, with a rumbling undertone that adds weight, the electric guitar making an appearance again as well. Hauntingly psychedelic, “Nightshade” has an overcoat of lysergic power, quietly used effects that really add to the tune, whilst a singing Melodica and percussion add yet more texture to the collection as “Fine Day At Last” weaves its magic, almost an epic within the context of the album.

Recorded in the Norwegian cabin, “Theremin Song” uses a digital Theremin and reverbed vocals creating a soft winter hymn, the album brought to a close by the wonderful “Campfire In The Snow”, seemingly mirroring the intimate beauty of the opening track, bringing us full cycle, a walk on paths less used.

Offering one last surprise, there is also a hidden track, a cover version of a Nick Drake song that fits in with the rest of the album perfectly. Which one ? I hear you ask, well go and buy this album and find out, a collection of songs easily worthy of your time.- Terrascope

A Lilac Decline
"The Mountain Rages"

Side B
7. Tunnelling Through
8. Nightshade
9. A Fine Day at Last
10. Theremin Song
11. Campfire in the Snow

Recorded at home in Galway, Ireland and Dalsåsen, Norway in 2016.
Produced by Keith Wallace and A Lilac Decline .

Special thanks to Keith Wallace.

"Music having a ghostly, hazy beauty that is hypnotic and easy to get lost in" - Terrascope

"Decline. I like the word ‘decline’. Always have always will. Like lilacs too so I’m probably ok with this lovely tape release on Rusted Rail.
Straight from the off this sounds like something special indeed. A Lilac Decline is Cecilia Danell (ah I get it!), of both Cubs and Loner Deluxe but with all respect due to those excellent acts striking out on her own is probably where she belongs. These are wonderfully evocative home made folk songs that deserve a much wider audience than such a lovingly hand crafted release would reach. She writes intimate folk songs with fingerpicked acoustic guitars and all manner of found sounds to give an otherworldly feel to the compositions. What results is a wonderfully saturated sound (tape helps) and the sort of thing that will appeal to fans of Julie Byrne and Marissa Nadler but possibly because of the recording process is much more personal. You feel that Danell is singing right to you, right in your ears. Occasionally bursts of noise appear to disrupt the folky flow but it all kind of works. Really gorgeous stuff and highly recommended." - Norman Records

“The Mountain Rages is a beautiful album of gentle, lyrical, yet intensely personal, folk influenced songs. Thematically it moves from vulnerability, to yearning, to faltering hope, culminating in it's emotional centrepiece - ‘A Fine Day At Last’, its mellow Velvets-esque feel building into a giant sigh of relief. Given how the songs are built around Cecilia’s voice and acoustic guitar, it would be tempting to place her within the loaded 'singer-songwriter’ category, but listen closer, there is also shoegaze and indie, even just voice and percussion (on wine glasses ). Indeed, both the artist and her music possess more diversity than is initially apparent.” - The Galway Advertiser: Galway solo artist of 2017