Shelter from the Shadows

by A Lilac Decline 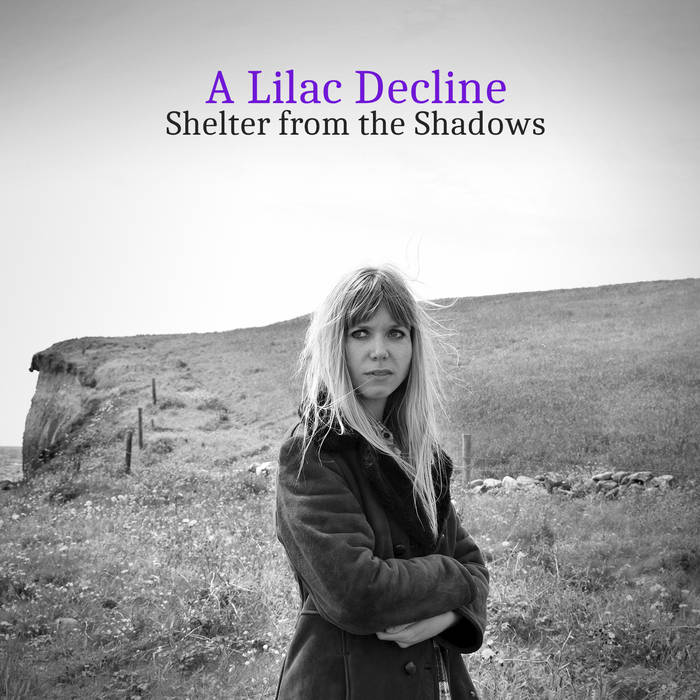 Rusted Rail is proud to announce the release of A Lilac Decline's second album, 'Shelter From The Shadows'. A Lilac Decline is the anagrammatic musical pseudonym of visual artist Cecilia Danell. Originally from Sweden but resident in Ireland for over a decade, Danell is also a member of fellow Rusted Rail acts Cubs and Loner Deluxe. Her debut album 'The Mountain Rages' (Rusted Rail, 2017 rustedrail.bandcamp.com/album/the-mountain-rages ) came together during sessions in the spring and the wet summer of 2016, recorded via one microphone and a bunch of borrowed and found instruments. Whilst there were flashes of electricity on her debut album, her second album for Rusted Rail finds A Lilac Decline going electric, Telecaster in hand. Having pretty much ditched the acoustic guitar that was so prominent on 'The Mountain Rages', her sophomore album 'Shelter from the Shadows' is shot through with glimmering and shimmering six string serenades, fuzzy melodies and chunky riffs. It’s not all sturm and strum though as her signature sound of fingerpicked guitar is still present, whilst some electronic elements have also crept in. A dusty banjo also rears it's head and Brian Kelly from So Cow
plays drums on two songs. 'Shelter From The Shadows' is both a musical and sonic progression from her debut album. Plugged in
and turned up, Danell overcomes any conventional wisdom regarding the 'difficult second album' as this upcoming release finds her exactly where she needs A Lilac Decline to be. Rural electrification has rarely sounded so sweet.

A Lilac Decline - Shelter From The Shadows: Liner Notes

Watch a live performance by A Lilac Decline at Nuns Island Theatre - www.youtube.com/watch?v=ntLp2FPYxSc

"Opening with a shimmering haze of distorted guitar and gorgeous ethereal vocals, the second album from Cecilia Danell is a wondrous collection of pastel hued tunes wrapped in swathes of guitar and twinkling with ornate touches and textures that only heighten the wonder. As we listen further, “Sunset Song” draws you in ever so gently and you are happy to respond, gladly getting lost in the tune.

With sweet guitar line to tempt you, “Vague Promises” is augmented by electronic textures and a melancholic ambience, the soft fall of autumn leaves on a sunny day. Even more beautiful, “Foxglove” is one of my favourite pieces on the collection, tension added by some rumbling drums and waves of synth, the sound of a coastal work in winter, voice and guitar once again leading you onwards. Over 14 haunting songs, this album oozes quality and has a sonic palette that allows each song to bleed into the next creating a cohesive feel to the songs that really works, whilst allowing each song to stand on its own.

Within an album of highlights, a few tracks shine out for me personally with, “Order in Chaos” benefiting from backing vocals, electronics and banjo, even briefly sounding like Vangelis towards the end, whilst “Blood Red Moon” is poetic and bathed in dreams, like a moon lit swim, reminding me of Enya or The Breretons. Elsewhere, “Back to the Sea” is a lilting tune with delightful melodies, the album brought to a close by “Dragonfly” a floating intro interrupted by fuzzed/distorted guitar that deserves to be played loud, the interplay of noise and melody adding dynamic tension to the slow burning tune. It takes a while to really hit home but this album has many depths and fans of Galaxie 500, Mellow Candle or Azalia Snail may well find much to enjoy." - Terrascope


"A Lilac decline is a project of visual artist and musician Cecilia Danell, Swedish-born but residing in Ireland. She is coming back with a new album released by Rusted Rail label. Under the skin of the singer/songwriter idiom there's lots of going on here. Right from the start with Sunset Song you can feel that her music is rich tone-wise and also in production. There is a linear line of narrative going on here but the background is so rich and gives an excellent response to Cecilia's sweet voice and her guitar lead. There is plenty of second and third layer sounds that substantially give her songs depth. The layering is excellent but despite some heavy duty work, her songs are transparent and have wonderful feel and stay with you for a good while."- Felt Hat

"It begins with a reversal of linear time - with a sunset, and sees the encroaching darkness, not as forbidding, but as a moment to take stock and be glad of what has been, and what is.This is 'Sunset Song', the opening track of Shelter From The Shadows, the second album by A Lilac Decline - the musical alter ego of Swedish born, Galway based visual artist Cecilia Danell - released by the independent Galway label Rusted Rail. Chiming chords bathed in hazy reverb and suffused with lush psychedelia create the feel of a summer evening. While its lyrics acknowledge an underlying unease ("We just laughed and hid the evidence" ), it refuses to give in to pessimism, its closing refrain, "We'll be fine, we'll be fine", instead offer hope and reassurance. That sense of compassion and empathy is key to the entire album.

"The lyrics reminisce about things that a lot of us have been longing for, like being able to move about freely and not having to worry about proximity or touch," she says. "The common thread that runs through these songs is that of a shared humanity. "We may have spent a lot of this past year apart, and a lot of that time has been quite lonely, but struggle, grief, and perseverance are not unique to any one person. Neither is joy and curiosity. Shelter From The Shadows recognises sorrow and joy and all the multifaceted aspects of life."

Shoegaze defines much of the sound and approach on this album, not only 'Sunset Song', but also 'They'll Never Know', with a guitar riff straight from PJ Harvey and a chorus that owes a debt to My Bloody Valentine, but the sentiments and delivery are all Danell's own. 'Burn For You' is the album's most personal song - a tribute to Danell's late father. "It felt cathartic to write," she says. "as it helped me move from a debilitating sense of loss to a stage where I was able to celebrate the things he taught me and how he would live on through me via all the ideas still waiting to happen." Not that the folk-rock elements of her debut have entirely disappeared. 'Stars Seem So Far', with it's lilting, swaying melody, and three-note repeated refrain (on what sounds like an accordion ) has a ring off real inspiration to it; 'Blood Red Moon' is an acoustic delight; while 'UV Light' blends elements of folk, dream-pop, and seventies sci-fi to create one of the most lush and beautiful songs Danell has yet written.

A multi-talented artist across two fields - visual arts and music - Danell has crafted her finest musical statement to date, and in the process created one of the best releases to emerge from Galway in 2020. A beguiling collection of shoegaze, psychedelia, and sci-fi ballads"
- The Galway Advertiser

"Mixing and blending elements of shoegaze, folk and dreampop, Shelter from the Shadows is a captivating collection of intimate and tender songs. It is rich in emotion and at times heartbreaking – notably in the shiver-inducing Burn For You, a tribute to Danell’s late father. It is also warm, nostalgic and forgiving with Danell singing at times as if to lost connections and missed futures, on the verge of lamenting but ultimately accepting." - notbad.ie

'Back to the Sea' - www.youtube.com/watch?v=0r4sXdzULfk