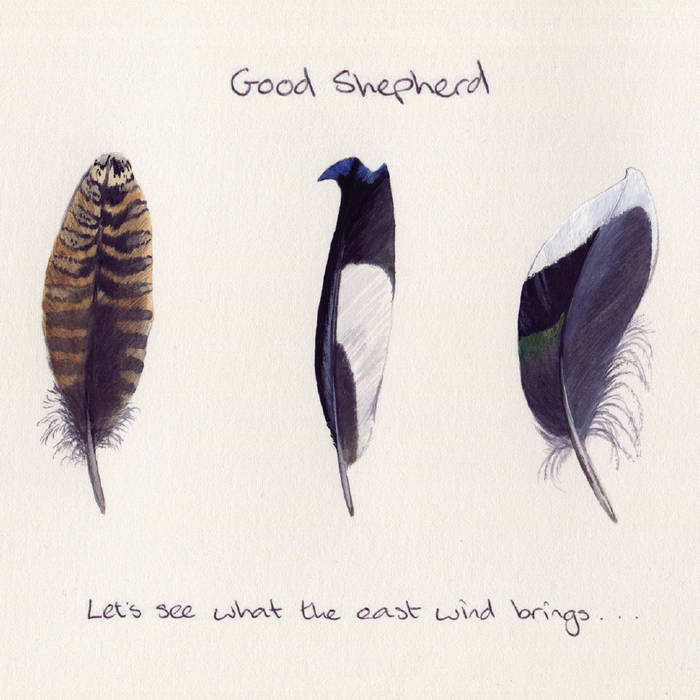 𝕿𝖍𝖊 𝕾𝖕𝖊𝖈𝖙𝖗𝖊 I adore this. Favorite track: Flown the Other Side.

suburbansky Something to soothe and calm my nerves on a chilly yet sunny October morning in this stupid Age of Stupid!

Rusted Rail is proud to announce the release of 'Let's See What the East Wind Brings...' by Good Shepherd. Like labelmate Songs of Green Pheasant, Good Shepherd is another mysterious one-man-band from England. The Cambridgeshire-based recording project of Duncan Poyser 'Let's See What the East Wind Brings' is the first (and last) album by this teacher and 'twitcher', whose interest in birdwatching is evident from the artwork that adorns the lush 6-panel gatefold CD sleeve.

This collection is made up of newer songs that sit alongside works which appeared on two previously-released limited edition EPs on the "classic era" Rusted Rail 3inch disc format: 'Her Darke Aspects' and 'Ah...Good The Sea' (though some of the pre-existing tracks are now longer as they have been freed from the constraints of the 3inch format and now reside snugly on Compact Disc for the first time). Let's See What the East Wind Brings...' takes in buoyant nautical folk, hushed acoustic confessions, glitch-damaged balladry, and sepia-tinted home-made psychfolk stylings transmitted directly from the Cambridgeshire Fenlands.

Says Poyser of the album: "Let's See What the East Wind Brings was recorded between 2005 and 2010 during my first experiments in multi-track recording on a Tascam 8-track. Throughout, the recordings are steeped in references to birds, an obsession since childhood. What is also evident to me now are the narratives and mantras I was using to steer myself through life at that time, a decade before a diagnosis of autism. I hadn't realised then that my need to escape into headphones and an intense focus on sound was to compensate for my loss of sanctuary, as I never felt I could truly lose myself in birding while I lived in London. So these experiments with guitar and song become a notebook of emotional survival from a boy with a far away look in his eye, trying to connect with a lost love while navigating the tangles of humanity in a city way too big for comfort."

From songs drenched by sea spray to tunes baked under the summer sun, Good Shepherd's fire-side folk and mountainside melodies highlight his ability to play on the heartstrings, his serene songcraft eventually underpinned by approaching squalls before calm is restored. Let Good Shepherd's hushed midnight musings and elemental music guide you home.

"Good Shepherd deals with that particular axis where folk music rubs up against spacial post-rock and the production is vivid yet gritty. It's perhaps no coincidence that I start this review on a rare Phoenix rainy day. Continuing in a perfect Yorkshire Autumn, the theme abides. This is not sunbathing music. It's for dew drops on spider webs, golden leaves, rain on the grass. It's beautifully understated without ever being wet blanket music or soul-less. Back once again in Arizona the music still resonates. It's sounds for all seasons and landscapes. The standout track for me is 'Nightjar Song' where the whole track is accompanied by that strange birdsong. 'Lets See What The East Wind Brings' is a masterpiece of spectral dreamfolk." - Was Ist Das


"This, the latest release from the ever reliable Rusted Rail, is a collection of drifting psych-folk tunes culled from two earlier releases plus three new songs from the same period. Originally released on 3” cd-r (“Ah...Good the Sea” and “Her Darke Aspects”) some tunes are now extended in length and all the songs blend together beautifully to create a fully formed and highly engaging album.

Seeming like a mission statement, “flown The Other Side” is a song of migration or escape, gentle guitar and soft drones creating a melancholy texture that is haunting and wistful, a delightful beginning that is matched by “The Beast” an undulating bass/guitar forming the bass for the cracked and fragile vocals, drones filling the spaces in between before “Slow Down” adds some percussive elements to the music, the tune tiptoeing through the room, a beautifully paced folk tune that is like watching a deer caught in the early morning mist.

Seemingly continuing in a similar way, “Sunday Morning's Son” suddenly takes off into a swirl of West Coast happiness, ending abruptly as the drones of “Lungs On Fire” take over, with flutes writhing together to create a soft cloud of noise that is gently engulfed ,over time, by a rising tide of electronics, itself abruptly ended as a sweet guitar takes over, those vocals again holding sway forcing you to listen intently.

Basically the work of one man, Duncan Poyser, these tunes have a definite soundscape of their own, the playing is delicate and precise creating atmosphere with ease, the whole thing reminding of many of my favourite bands (Gorkys, John Martyn, Jefferson Airplane, Early Genesis) whilst remaining unique and highly listenable.

Moving on the quality continues with “There Is A Mountain” sounding like a lost seventies pastoral prog intro that slowly morphs into a Neil Young sounding tune, the guitar tone nailing it, whilst “Sing Again”, the longest piece on the album, is a languid, drifting track that favours emotion and texture over dexterity, a soft flowing river that slowly picks up pace before being swallowed by the sea.

With rippling synths and strummed guitars, ”Nightjar Song” has underlying melodies sweet enough to make a grown man cry, a flute aching over the top to form a dreaming soundscape that engulfs the listener gently yet completely.

To end it all, “End of All” is a sad, slowly dissolving tune that disintegrates completely into a wall of white noise and distortion, the repeated vocal line remaining merely as a memory underneath the chaos.

According to the website this will be the last release from Good Shepherd, which is a darn shame as it has been a complete pleasure to re-visit this music that I originally reviewed in its EP form ten years ago and I would love to hear some more. The perfect winter gift, dive in." - Terrascope


"Although geographically separated from the main family of the imprint’s artists, Duncan Poyser’s one-man Good Shepherd enterprise extends upon the shared Rusted Rail philosophies beautifully with Let’s See What the East Wind Brings… There is though an extra time-discombobulating twist. The gathered compositions were actually cut between 2005 and 2010 at home in Cambridge and some previously slipped out on early rare Rusted Rail 3” CD EPs.

Assembled largely alone, on an 8-track Tascam recording set-up and beautifully tiered with acoustic and electric guitars, woozy harmonica, keyboards, low-slung bass, rudimentary percussion, self-mirrored vocals and oddments, Let’s See What… draws you into a hermetic bubble as if it were a compilation of sublime outtake pieces rescued from a Louisville back porch, an instrument-cluttered Chicago loft space, a chilly Duluth living room and a dimly-lit New York bedsit.

Hence, there is fragmentary folk akin to Papa M’s Whatever, Mortal, nods to the murkiest minimalist segments of the Codeine catalogue (“The Beast” and “Slow Down”), shades of Rivulets and early Songs: Ohia (“Sunday Morning Son” and “Good Today”), hints of Will Oldham’s formidable formative Palace recordings (“There is a Mountain”) and glances back to the quietest Lullaby for the Working Class moments (“Sing Again”).

Whether Duncan Poyser was ever actually in thrall to any such touchstones at the time of original recording is unclear but they somehow seeped into the somnambulant DNA of Let’s See What the East Wind Brings… with a warming ease, to communally forge an intimate melancholic masterstroke." - Concrete Islands


"Let’s See What The East Wind Brings is the debut album from Good Shepherd, the moniker of Cambridgeshire-based Duncan Poyser. The songs themselves were originally recorded between 2005 and 2010. There’s an underlying simplicity across all the tracks and Poyser prefers to keep things relatively simple and build a small handful of layers to the songs, allowing lots of space and warmth across the album.

It’s very easy to imagine this collection of songs being played in a fireside setting. He brings the outside inside with this folksy collection of songs. ‘Slow Down’ has an ‘almost there’ vocal which builds nicely into the harmony-driven chorus. Similarly, ‘Sunday Morning’s Son’ has a feel which would appeal to fans of Fleet Foxes or The Low Anthem. There’s a revolving acoustic guitar riff throughout with elements of percussion which brings to mind the crashing of waves.

Elsewhere, tracks such as ‘Lungs On Fire’ have an almost drone-like quality which works really nicely against the more acoustic folk backdrop of the majority of tracks. This album has an honest feel; the songs are stripped-back and bare, allowing no place to hide. ‘Sing Again’, for example, has the simplest and most effective of guitar riffs, combined with a vocal which works so well to carry the song because everything else which might usually be present in a song like this has been omitted by design. ‘End Of All’, in contrast, fades with the sound of a distorted drone guitar and allows the album to go out with a bang rather than near-silence.

In short, a rather lovely collection of songs which will appeal to fans of minimalist folk which pull on the heartstrings." - Sic Magazine


"If you need an escape route away from life's pressures, Good Shepherd & Rusted Rail have left the hatch open. The route may be dark & there will be some stumbles along the way, but let his soft voice & dreamy psyche-folk threads guide you to the end of the tunnel" - The Slow Music Movement

"A reflective, low-key collection of whimsical, slightly lysergic folk and vulnerable, glitchy torch ballads. Fitting perfectly with the label’s gently undulating folky releases this features gorgeously glacial acoustic guitars, bowed cymbals and gentle half-whispered vocals, the songs ebbing and flowing reaching pinnacles. The influence of the sea cannot be underestimated, the songs have an obvious nautical theme and the whole rhythm of the thing recalls the undulations of the moving ocean, the waves crashing on things " - Norman Records