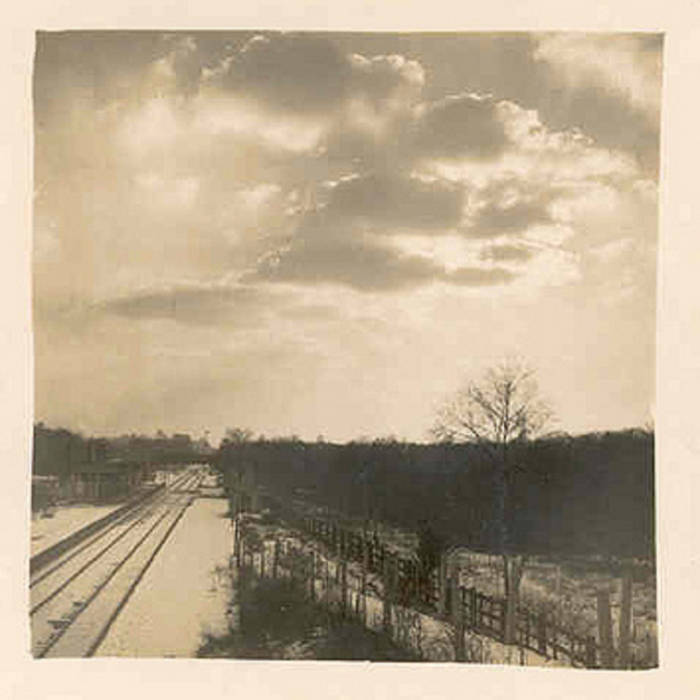 This week as part of the Rusted Rail 10th Anniversary celebrations its the turn of Directorsound. I first came across Nick Palmer sharing space on a Geographic compilation with The Pastels, Plinth, Kevin Shields and Maher Shalal Hash Baz, and via the wonders of MySpace I eventually found myself in Dorset, hanging out on Mike Tanners' backgarden decking on a bright Sunday morning listening to the master copy of Leaving the Moors and drinking a strong local cider - I didn't need much convincing to release it. Fast forward a couple of months and the lads are in Dublin on the first date of an Irish mini-tour I'd put together, and what a "first date" it turned out to be as Nick met his future wife Gráinne that evening - the first Rusted Rail romance!

Rusted Rail are proud to welcome Directorsound to our little world. A pioneer, (along with Rusted Rail labelmates Plinth) of the fabled "Dorset Sound", multi-instrumentalist Nick Palmer has delivered a gem called "Leaving the Moors", a secret world conjured from old musical instruments: dusty, creaking and full of history, these songs are by turns melancholic, mesmerizing, and moody - the sound of the circus leaving town. This 3inch EP is housed in a handmade sleeve featuring beautiful archaic photograph of unknown origin...

A small treasure in a hand-made sleeve. Remember that day long ago? When we were caught by a sudden downpour amidst the sultry sunshine and sheltered under the trees, we listened to raindrops falling upon leaves and laughed ? Knowing that all too soon the summer would be gone and become nothing more than a memory. Now the blurred imprints are somehow held upon a shiny magic-disc, put there by an unknown dream weaver. - Robots and Electronic Brains

His field recordings give each song a beautiful organic touch, leaving the instrumentation to be as brittle or sparse as it wants to be, these sketches breathe the outdoors, they sound like they're recorded in a small farmyard in the golden sun of a hazy afternoon whilst animals doze & the lightest breeze makes you sigh with contentment. - Norman Records

Rusted Rail delivers another tiny gem with the lovely "Leaving the Moors" by Directorsound, and continues to rekindle my interest in the mini-cd as a viable release format. The chosen instrumentation here gives the feeling of a traveling band of gypsies from a fairy tale- lots of accordion, melodic nylon string guitar passages, banjo, bells, piano, and some wonderful lumbering percussion. These seven brief instrumental pieces are the perfect accompaniment to deep winter dreaming. They are never hurried, preferring instead to patiently open up to the listener like a slow walk down an old winding road. Palmer's ear is refined and mature and here he has created a little world of melody that is whimsical, romantic, and nostalgic- an essential pickup for a short but sweet escape. Well done. 10/10 - Foxy Digitalis

This sound is rooted in esoteric instruments from centuries passed ("Amber Ember"), light ambient field-recordings made much heavier by the sparse instrumentation ("Tuberose"), and a fractured, though (mostly) traditional sense of composition, as best exemplified on the chit-chat of burlesque accordion, banjo, and proto-bossanova guitar on "The Gin Trap".
- Animal Psi

Another beautifully melancholic collection from the Rusted Rail label, this one comes from English-based multi-instrumentalist Nick Palmer a.k.a. Directorsound, who has previously released material on the Geographic label. Featuring some lovely old style moody folk sounds which at times call to mind the soundtrack to the legendary Deerhunter film, the mini-album features seven short instrumental little late night acoustic gems.
- Road Records

This is the kind of charming music which could've soundtracked vintage children's tv, music of hazy afternoon picnics by the riverside, but just when too much contentment could set in, a piece built on clock chimes suggests ominous portents. It all works out in the end and our riverside friends dance to guitar, accordion and a few other things at the titles roll. Rusted Rail comes up trumps again and the theatre of the mind isn't doing too badly today either!
- Boa Melody Bar

Nick Palmer's been huffing around the Francophile campfire as Directorsound for a good few years now, though he's slipped largely under the radar in recent times. Leaving The Moors covers his usual ground - nylon string guitar weaving through countless inversions while rickety percussion and gentle flourishes of accordion, glockenspiel and piano are strung carefully across the diorama. He's a romantic melodist by nature, equal parts Comelade, Veloso and Reinhart. Very Charming - The Wire, December 2007