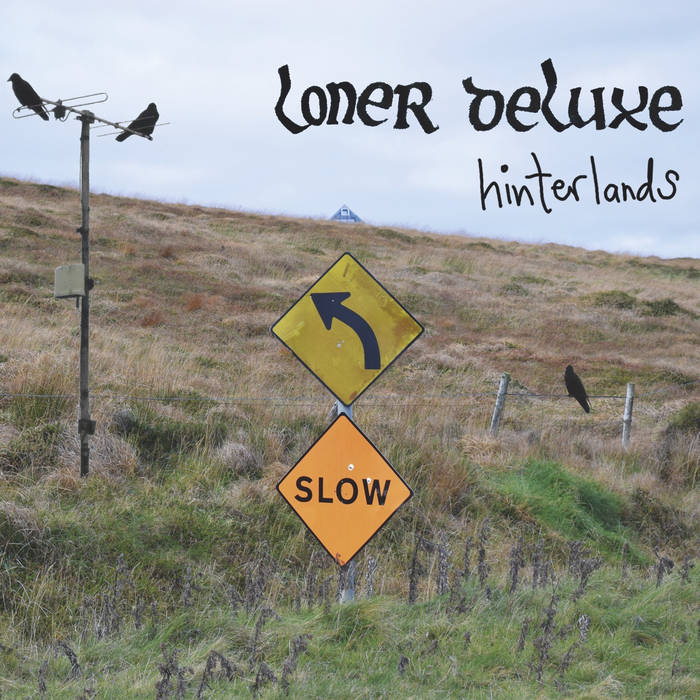 Rusted Rail is proud to announce the release of 'Hinterlands', the 4th album by Loner Deluxe. This CD was mostly recorded on a rural recording residency in Ballycastle, in north County Mayo where Keith Wallace a.k.a. Loner Deluxe immersed himself in the rugged megalithic and Atlantean landscape. The surroundings seeped into the music as electronic folk songs met eco-balladry, music for demolished dancefloors and tunes inspired equally by old drum machines, rustic earthy banjo tones and ambient cosmic country music for space cowboys. This album was recorded via an Arts Council Agility Award and Loner Deluxe would also like to acknowledge the support of the Ballinglen Arts Foundation in making this album a reality. Bolstered by field recordings from an abandoned church and graveyard in the locality, 'Hinterlands' inhabits spaces both real and imagined and also features a transatlantic collaboration with US-based Irish poet Elaine Cosgrove. It wouldn't be a Loner Deluxe album if Wallace wasn't staring at the night sky and all that it contains - so there are also songs about zero gravity tourism and seeing Nick Drake's sister in space, a tone poem evoking the sonic scenery of a lunar swamp and  there's even room for a kosmische drum'n'bass number and a motorik mantra. Getting in touch with your roots has rarely sounded so futuristic.

Recorded in homes in Galway and Mayo, with additional recording in Kryklyckan, Sweden, Atlanta, Georgia, USA and
Ely, Cambridgeshire, England.

"A vibrant mingling of influences from krautrock and indie-rock to hauntological electronica" - Norman Records.


"Engaging and rather fabulous, the latest album from Keith Wallace a.k.a Loner Deluxe is a collection of 14 tunes that shimmer, rattle, creak and then softly infect your brain in a charming and enlightening manner. Laced with intriguing samples and filtered through a cloud of ancient space dust, the music is part folk, part electronic and generally otherworldly, the sounds and words wrapping around you like a well worn and much loved coat protecting you from life's worries and telling tales to keep you amused.

After the folky Banjo infused opener, “How the West Wind Blows” things get slightly stranger as “Dun Briste” gets wrapped in electronics, using repeated vocal lines as a way to hypnotise the listener, a trick employed throughout the album to great effect. Amongst my favourite moments on the collection is the pairing of “I Saw Nick Drake's Sister In Space” with “Search and Rescue”, the former a shimmering Psych-Pop gem, whilst the latter is a reverb drenched hymn with an ancient heart, the music droning and almost lost in the distorted noise, the lyrics seemingly telling you something very important that you once knew.

Moving through the album, “We Used To Dance In The Sky” is driven upwards by a repetitive beat and swirling electronics, a heady blend that is easy to immerse yourself in, whilst “Stolen by the Faeries” takes folk music into wyrd territory , the spoken samples telling a traditional tale over a modern musical setting to great effect.

It is often hard to get a focus whilst listening to this album, sounds rise and fall, beats moving your feet whilst distortion and echo confuse the head, the lyrics adding yet another element to the tunes, yet this is a good thing, the experience like eating a large bowl of soup, the ingredients foraged from the countryside around you, flavours both familiar and new, the whole both comforting and tinged with the feeling that something strange could happen at any moment, the meal washed down with a large glass of ale or in this case, the seven minute kosmiche romp of “Hollow Mountain”, the perfect end to the collection, leaving you very contented.


"Whatever has been in the Rusted Rail label water supply over the past couple of years certainly isn’t doing any harm – quite the contrary in fact. Following on then from still-quite-fresh outings from Cubs, A Lilac Decline and Loner Deluxe, which have contained the common recurring personnel of Rusted Rail CEO Keith Wallace and acclaimed visual artist Cecilia Danell working alongside others, this new double-sized album from the latter project proves to be another strong suite.

Recorded largely at a rural recording residency in Ballycastle, Ireland, Hinterlands picks-up where last year’s smorgasbord-like Field Recordings left-off, finding ringleader Wallace continuing – with the support of Danell and a few guest accomplices – to mainline and remould ideas from his nineties-to-noughties-heavy record collection to great effect.

The reference points are less immediately identifiable than its on predecessor however, with an immersive reach that proves to be richer and more seamless, especially when Danell’s vocals are fused closely next to those of Wallace, amidst fuzzy seams of guitars, banjo, bass, assorted synths and related oddments.

Although clocking at over an hour, Hinterlands doesn’t feel bloated or self-indulgent, contradicting the cliché that longer CD-based releases are always unwarranted. Instead, it’s a double-album to keep us contentedly lost within, for the rest of this year and beyond."
- Concrete Islands


"Hot on the heels of 2021’s Field Recordings, we have more lo-fi electronic folk rock/alternative rock from Ireland courtesy of Loner Deluxe AKA Keith Wallace.

This time he’s once again exploring lo-fi psychedelic ideas best exemplified by songs such as ‘Nick Drake’s Sister In Space’, which delicately tips its cap to The Stooges’ ‘I Wanna Be Your Dog’. Many ideas are extended, almost-hypnotic drones and jams, which are incorporated into layered male/female harmonies. Sometimes (such as on ‘Carbon Footprints In The Mud’) Keith sounds like a latter-day Michael Stipe with just the right amount of depth in his vocal to carry the song.

The album feels like his most realised work to date. It fuses many different ideas, and the album flows really well with a coherent feel throughout. Where the album takes a left turn into lo-fi post-rock on ‘Sea Glass’, for example, it fits seamlessly within the overall structure.

Elsewhere, tracks such as ‘We Used To Dance In The Sky’ have an otherworldly feel, mixing ‘70s-sounding synths with a pulsing rhythm. It could easily pass as an extract from a John Carpenter movie.

Keith uses voice samples and a range of instruments, but intentionally keeps the instrumentation stripped back and minimalist to allow the music to develop. Sometimes it comes across as a lo-fi version of Death In Vegas, mixing sounds over repeating, pulsing drone patterns.

The album arguably works because it rarely shifts up a gear in power between high and low volume – ideas are propagated and nurtured, but never overworked. ‘Bog Disco’ is a pulsing bass note in the key of G. Sounds and samples are then layered gently on top, like a house of cards. Similarly, ‘Dun Briste’ uses a repeating rhythm to great effect and low-key harmonies, acoustic guitar, keyboard and a circular electronic sound akin to a didgeridoo all layered on top.