by The Declining Winter 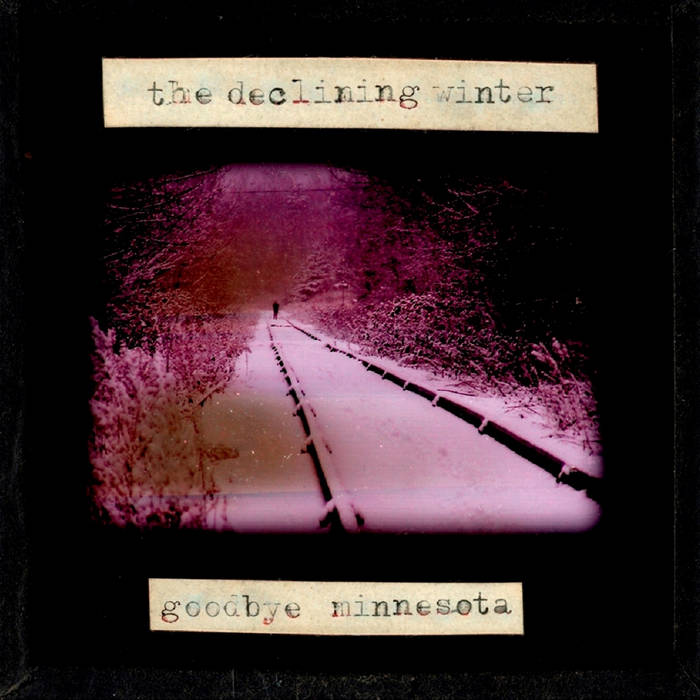 This week it's the turn of "Goodbye Minnesota" by The Declining Winter to make it's home on the Rusted Rail Bandacmp page. It was in ye olde days of MySpace that I first stumbled across the fact that Richard Adams from the mighty Hood had some solo tracks home-brewing in cyberspace. A few messages later and things were in motion to make an album and release it on Rusted Rail. I was beyond delighted as Hood are a band whose aesthetic is close to my heart - glitch-damaged acoustic guitar-flecked, rain-soaked music that contains a whole world inside its existential grooves. A few trips to Leeds later, taking in great pubs and talking late into the night with Richard, I had a very positive feeling about the album "Goodbye Minnesota". And so it came to pass - glowing reviews and the disc flying out the door - it went to two presssings and I was delighed for it to sell out both of its runs! Public House Recordings even saw fit to release a 180gram vinyl edition of it once the RR CD version had vanished - a very high compliment. So here is "Goodbye Minnesota" available digitally for the first time ever.

Original Press Release -
"The Declining Winter is the solo musical project of Richard Vincent Adams of Leeds, England, a co-founder of Hood. "Goodbye Minnesota" is his debut album under this guise. Ranging from epic claustrophobia to rustic folk-dub explorations, with spectral atmospheres anchored to pastoral roots, "Goodbye Minnesota" delivers hypnotic melancholia via abstract hiphop, shoegaze, dub and post rock explorations. Along the way there's also rain-drenched pop and globally warmed electronic folk. These are ghostly songs filled with absence, longing and seasonally affected melodies - the sound of cassette tapes spilling out of the glovebox of a 1970's Datsun Sunny somewhere in the north of England, captured on Super 8 film."

"Richard Adams spent much of the last decade alongside his brother Chris as the motivating force behind English pastoral rock outfit Hood. With Goodbye Minnesota, Adams extends that group's late-period move into gentle electronica, warping and glitching minimal folk-pop melodies played on bedroom guitars and drums...much of Goodbye Minnesota is autumnal and graceful, it's quietly resigned tenor gesturing toward emotional troubles that remain just out of focus." - Uncut

"There's a whole World inside Goodbye Minnesota, one that belongs to Adams, and one familiar to many of us inspired by melancholy, introspection and life's rich simplicity." - Cyclic Defrost

"The Declining Winter is Richard Vincent Adams (also of Hood), an unconventional songwriter with an eye for experimental folk pop. Goodbye Minnesota is a very satisfying debut album, and it's been put out in a nifty cardboard sleeve courtesy of the charming Rusted Rail label. This largely instrumental disc is a wistful, highly atmospheric expedition, although it retains a melodic quality that makes it especially listenable. Often, Adams' songs sound like excerpts from film scores - which is a good thing, to be clear. The folky twang of "We Used to Read Books," for example, conjures up images of a dusty Mojave desert at dusk, and "Goodbye Minnesota" might accompany a slow aerial shot of a depressed suburbia. Since Goodbye Minnesota isn't afraid to experiment, it doesn't really qualify as a pop album - even though these soundscapes are often remarkably infectious. Instead, culling influence from folk, post-rock, and electronic music, Adams has produced a uniquely engaging record that deserves to be heard by adventurous music lovers." - Indieville

"It has that wonderful hazy autumnal malaise that Hood at their best have with minor chords picked out on guitar and lethargic vocals and a dubby feel." - Boa Melody Bar

"Whispered, frail vocals disperse amongst the roomy, acoustic productions, casting a tangible sense of gloom (again, in a good way) over these subtle and melancholy songs. Over the course of this record you can hear elements of abstract hip hop mingling with weird plug-in experiments and a kind of primitive, unplugged approach to shoegaze, and then, just when you think you've got the album pegged, you'll hear something like 'Last Train To Mapel Grove', which is every bit as lonesome and dejected as its title suggests, calling upon sepia tone string samples in a fashion that recalls the finest L. Pierre recordings...it becomes pretty clear that you're in the presence of a quietly very special, very memorable album." - Boomkat

"The debut album from the Declining Winter is released on the Irish-based label Rusted Rail. The label has gained quite a reputation for its beautiful hand made sleeves and is a perfect home for this kind of intimate collection from Richard Adams, member of Domino band Hood. Like his former band, this is a really beautiful collection of live instruments, found sounds and touches of electronica. There are slight comparisons to the early dubby post-rock of Tortoise along with the more subdued intimate pop of Postal Service but Adams also adds in lots of lo-fi scratchy sound effects and heaps of crafty underground hip-hop beats. It's a superbly wide ranging collection of sounds all held together with a certain rustic live feel. It's both highly intricate and hypnotic at the same time. A rare gem that you shouldn't let pass you by." - Road Records

"A mingling of simple acoustic guitar codas, dub textures, stargazing ambient electronics that give you goose bumps, melancholic one note keyboard lines, sad, graceful drums and reserved, tender vocals. I reckon that we've got ourselves an altogether sensual, pure and quietly exhilarating album that will delight fans of (especially) mid-period Hood & the legendary Bristol indie underground. All dressed in a recycled house mounted with photo on Ireland's Rusted Rail recordings." - Norman Records

"This is one of the releases of the year. A frosty musical journey that conjures up wondrous thermal images. Using sounds that are rustically pastoral in nature and form, Richard Vincent Adams has concocted the perfect "winter warmer." - Crumbs in the Butter

All songs made by Richard Vincent Adams

Songs by R. Adams except ‘To Know Gospel’ and ‘Last Train to Maple Grove’ by R. Adams/B. Cummings/M. Cummings and ‘Oh God C’mon’ by R.Adams/N.Hodgkinson

Track 10 contains a sample from ‘Letter’ by John Clyde-Evans taken from the album ‘(for ht/rp/j&s)’. Used with kind permission.

Originally released in 2008 on CD by Rusted Rail (RR14).
Re-issued on vinyl in 2011 by Public House (the Shoulder of Mitten)