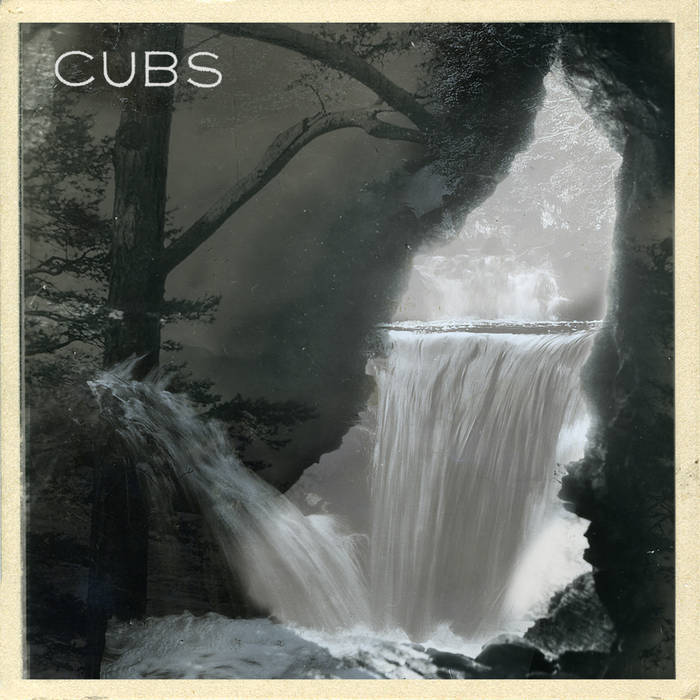 Rusted Rail is proud to announce the release of 'Frozen Waterfall', the third album from Irish psychedelic folksters Cubs. This album by the left-of-field folky group emerges at a time when folk-influenced music has risen again in Ireland, though Cubs have been ploughing their own furrow since 2006. Cubs is comprised of members of A Lilac Decline, Phantom Dog Beneath The Moon, United Bible Studies and Loner Deluxe and their third album was recorded in a quick three week burst of collective activity. 'Frozen Waterfall' veers from upbeat forest-folk fingerpicking to mellow moodpieces, with detours into sun-baked
songcraft, acoustic atmospherics and even a dash of folk-metal.
The album's cover is a suitably dreamy yet earthy photomontage of postcards from the 1930's discovered at a Belfast car boot sale.

The person listed first under each track was the originator of the song:

Cubs create a brand of shimmering, psychedelic folk music that is deeply engaging and immersive, the music revealing different elements each time you play the album, with different songs and moments becoming more/less dominant as the album flows from the speakers. Opening with a flurry of electronics and a desire to live in the woods, “Bramble Ramble” catches hold like a heady perfume on a summers evening, a sweet as honeysuckle, inviting you into the album perfectly. Once committed, the rumbling squall of “Thunder Calling” quickly becomes a melodic tune that reminds me of The Lilac Time or maybe Gorkys, the softness cloaked in a quiet drone that adds an air of tension. With some lovely guitar playing and delightful vocals,
“The Heat That Lies” is a personal favourite, one of those musical moments when you have to stop what you are doing (writing a review obviously) to just listen, bliss, the magic continuing as “Moonshine Sunshine” mixes Banjo, Korg MS-20 and birdsong into a dreamy slice of drone that spirals slowly like a leaf dropping into a crystal pool, the ripples remaining even as the song fades. Sticking with the drones the title track has some wonderful vocals, chiming bells and a slow motion feel as if digging into the earth itself, that particular spell broken as “The Beaten Path Through The high Grass” makes its presence known with spoken word, a sparkling mandolin and a creeping sense of unease as a fuzzy bass adds menace to the ghostly whole, a spooky melodica completing the picture with a repeated melody right at the end. Ending the album in style, “Aunt Myrtle” features the whole band, blending everything that has gone before creating the perfect Cubs song, great playing, narrative, an air of discovery and melodies so sweet they coat your very soul. Actually lasting just over 30 minutes, this album seems timeless so easy is it to get lost in its charms an experience to be repeated often. Instant sonic enlightenment - Terrascope


"Clocking in at just 32 minutes, Frozen Waterfall is a beguiling, atmospheric, at times poignant, yet ultimately uplifting synthesis of 1970s style folk-rock, indie-rock, lof-fi, ambient, underground, and melodic singer-songwriter. Despite its many disparate elements, they fuse together comfortably and naturally. Another strength of Cubs is that despite their passion for the avant-garde and the underground, they never let these elements come at the expense of melody, tunefulness, and a lightness of touch, and this in turn gives the music accessibility and heart." - The Galway Advertiser

"A beautiful, therapeutic record with many layers and textures" - This Is Galway

"Over the years, the Cubs collective has been the meeting point between different experiences and, to some extent, their synthesis, albeit occasional, of the whole small but fervent art scene concentrated in Galway around the Rusted Rail label....the composite mosaic of sound and stylistic elements of the Cubs continues to manifest itself in a gallery of enchanted bucolic instrumentals ("Moonshine Sunshine", "Neon Tetra") and derives from mild psychedelia ("And The Wind"), which are not lacking in channeling the creative chorality of individual musicians towards fragments of authentic folk ritualism (in particular in the tail of the title track).


Folk - it is true - continues to form the basis on which a variety of alienating atmospheres are grafted, dotted with field recordings, cosmic, rhythmic and synth frequencies, which dialogue with surprising naturalness with an acoustic picking with ancient echoes. The continuous mixing of the sounds brought by the members of the collective constitutes the very essence of "Frozen Waterfall", a work that in addition to arousing in each of its ten tracks the curiosity of the discovery places it as never before in balance with dreamy melodies, which combine under the same lens the landscapes of a melancholy real countryside and filtered by vivid imagination."
(translated from the original Italian review) - Music Won't Save You (Album of the Week)

"Those who are familiar with Cubs will know that they blend acoustic instruments with field recordings, the odd swathe of electronics and blasts of electricity, taking folk music into the future whilst retaining elements of the traditional giving the music a melodic heart and a human soul." - Terrascope

"What I like about Cubs is that they are folky without sounding too...um...folky. There's no traditional folk here, just late night
strummings and pluckings that could bring to mind at various times the likes of Will Oldham, James Yorkston and Red House Painters." - Norman Records

"By turns evokes Nick Drake, Cocteau Twins and Mazzy Star, and it's well worth your time." - Decoder Magazine

"A delicate concoction with the sun on its back and a gentle, shifting vibe... with an array of sweetly strummed and picked acoustics, occasional spoken interludes, and a hazy, welcoming bonhomie. Most of the tracks are short and rotate in joyous, slightly psychedelic circles. - Shindig Magazine