by The Dovetail Consort 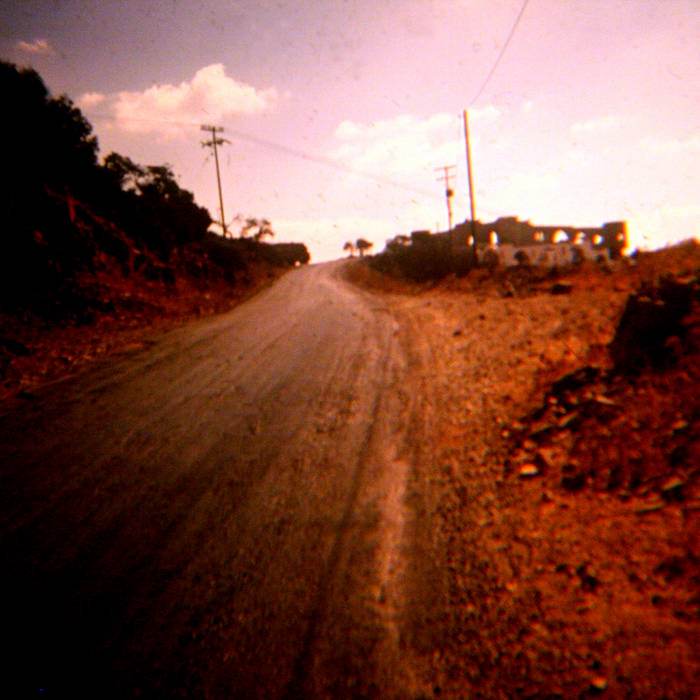 This Bristol-based project was founded in 2008 by Tim Newman after years of playing in bands and writing for television and other musical avenues. As hinted by the title, the EP combines both eastern and western instrumentation and tonalities, a concept also contained in the cover photograph. "I recorded these tracks tracks by playing a knot of lead parts over a repeating rhythm. The structure owes more to the stripping away of parts than the creating of them, like a sculptor creating by chipping away at material instead of adding to it. Holes in space are the gaps that allow the music to make sense" says Newman. This physcial version of this release is a 3inch hand-stamped EP/mini-album is housed in a handmade sleeve, and can be ordered here: www.rustedrail.com/dovetail2.html

Devotional
I have various albums of Indian music, and my favourite are the classical ones. The religious albums are described as "devotional" in much the same way as European church music would be described as "sacred". I just loved the word devotional, out of its Indian context it could mean a piece written in devotion of a person as easily as a religion. I like the idea of music inspired by devotion to someone or something.

Three Weeks
The tracks on this ep were taken from a collection of 14 tracks I recorded in a three week period at the end of 2008. Although editing them took a further three months, the initial recording had been (by my standards) spectacularly quick. In the past I'd mainly recorded electronica which leant itself to ponderous revision over months or even years. When I'd read rock biographies, I'd always been jealous of artists who completed albums in just a few weeks, so this piece recognises brevity of process.

1919
My absolute favourite band is the much maligned goth pioneers Bauhaus. They were originally known as Bauhaus 1919 after the year the German design school opened. Like many fans obsessed by the band that soundtracked their teenage years, I have loyally followed them through side projects, offshoots and solo careers of wildly varying quality. It becomes a matter of principal and loyalty, and this song is dedicated to all those who have the same relationship with a band.

Elastic Folk
The first album by jazz-rock band Nucleus is called Elastic Rock. The phrase reminded me of the "white guys play black music" phenomena which gave the The Beatles' Rubber Soul its name. In these recordings I played in genres which I'd never tried before, so there's always a part of you that thinks the result might sound fake, thus Elastic Folk.

Holes In Space
I recorded these tracks tracks by playing a knot of lead parts over a repeating rhythm. The lead parts often conflicted with each other and sounded a mess, so each part was subject to extensive editing. The structure owes more to the stripping away of parts than the creating of them, like a sculptor creating by chipping away at material instead of adding to it. Holes In Space are the gaps that allow the music to make sense.

Mainsail
This title doesn't suggest an idea so much as a mood. I love the feeling music can give you when you feel nostalgia for a time and place you never experienced. The word Mainsail makes me think of David Crosby's boat and the Beach Boys performing Sloop John B.

REVIEWS
========
The Dovetail Consort "East and West"
Bristol based solo artist Tim Newman releases this very beautiful collection of guitar instrumentals on the superb Irish based Rusted Rail label. The six track mini album is pressed on a very cute little 3 inch sized cd and comes housed in a beautiful handmade miniature card sleeve. The album features 20 minutes of haunting guitar instrumental sounds calling to mind the likes of James Blackshaw with some added strings. Fans of the slightly eastern tinged avant folk sounds of the likes of John Fahey will instantly fall in love with this one. Features some beautifully meditative folk guitar picking with a lovely spacial kind of ambient feel about it. - Road Records

East & West is a simple yet delicately harmonious record that shifts slowly through many acoustic fields of vision. At times I am reminded of the Dead Man's Shoes soundtrack and at others a totally organic version of Labradford. One thing is clear here, these guys have had enough time to dwell on and capture the beauty and stillness that surrounds anyone awakening to the crow of the cockerel on a blistering summer's morning. Songs that are plucked delicately, shift in waves of gentle repetition and slip you into hazy fields of humid summer country air. An apt title, as this release mixes many ingredients from the musical world of the Eastern and the Western hemisperes of this world and the results are palpably hypnotic.
"1919" has that uplifting melancholy that just makes you want to stare from your window and pretend the world does not exist. Once the song ends, it's clear that the real world could never be as beautiful as the one created in this song. Acoustic guitars spin joyous patterns and the listener becomes giddily trapped in this world of ambient folk inspired haziness. Acoustic guitars are the driving force on this release. Many songs sound like they are taking shape right before your ears. A jam session that is taking form and flight with tiny splashes of sound that have an impact on the whole jigsaw - like picture. Violins, Mandolins and instruments that I just cannot put a name to all add to this charmingly bright picturesque EP. - Crumbs in The Butter

The Dovetail Consort, an instrumental group hailing from Bristol, has released their first EP, The East and West on the indie record label Rusted Rail. The adorable 3-inch disc, which is placed in a hand-made sleeve, features a scenic photo of a dusty road at sunset, prepping you for the 20 minutes of serene lullabies that lie within. The group's sound features mainly acoustic guitar and strings, but there are many more instruments thrown in to give the album an eclectic blend of Eastern and Western sound, hence, the album title. The opening track, "Devotional", is a positive, earthy tune. It could easily be used on a movie soundtrack, playing while the credits roll after a bittersweet ending. It reminds me of what I imagine the Tuscan countryside would sound like, if hills could make music. From there, the album morphs into a more oriental sound on "Three Weeks". I can never exactly put my finger on what instruments are being played, as they change often, but it makes for a decent track. "Mainsail" has a similar vibe-both depressing and intriguing. The blending of Eastern and Western musical styles delivers a unique sound that you don't get to hear often. The Dovetail Consort aren't what anyone would consider "mainstream music", and you'll never hear them anywhere in public (unless it's a zen garden). You can't dance, sing, or really even get high to their music. But their EP is perfect for artists who just need a bit of soothing background noise while working on a project. - Balconytv..com

Oh nice one, more hard to identify 3" CDs on Rusted Rail! Just what our stockrooms need! It's a good job their releases tend to be of a very high standard innit. Otherwise I'd have to start windmilling. They do good press releases too, I've just read the one for this Dovetail Consort release and it's a beauty - leaving me totally at sea to find more words to add to it. It does mention Can though so I guess I should make it clear that it sounds next to nothing like them in practice, it's obviously more their musical approach that he's interested in rather than their overall sound. Essentially these tracks are based on simple, but heavily edited, folky guitar pieces which take on an almost mantra-like quality through the repetition of notes and phrases. It's quite beautiful really. - Norman Records

There's something rewarding about a record which is open about reference points and inspirations without sounding like any of those catalysts. Bristol-based Tim Newman's titles refer, variously to David Crosby's boat (Mainsail), the original full name of "much maligned goth pioneers" - his words - Bauhaus (1919), Indian classical music (Devotional) and Ian Carr's Nucleus (Elastic Folk) and all of these points of his musical compass make me warm to the record before the laser hits the pits. The music created by Mr. Newman is a charming world of guitar melodies with mandolin, 'cello, thumb piano and percussion, all wrapped up in Rusted Rails hard-to-resist 3" format, delightful on both ear and eye. - Boa Melody Bar

This 3” manages to squeeze six little compositions into its twenty minutes, favoring a vast and dusty folk sound emphasizing vast, wheat-filled vistas and back porch moments of tenderness. Performed and written solely by Tim Newman, who, it seems, is quite capable on a number of instruments ranging from guitar to fiddle, the album is unapologetically countrified and folky, as well as utterly sincere - this is an honest and credible approach at folk that pulls far more from Doc Watson than it does from John Fahey. There remains something cinematic and rich about this stuff that, though sounding instantly familiar, is not really in the vein of a distinct approach. A fine effort, this is a voice that anyone into folk of any sort should give an honest chance - extremely earnest stuff, and beautiful for it. - Foxy Digitalis