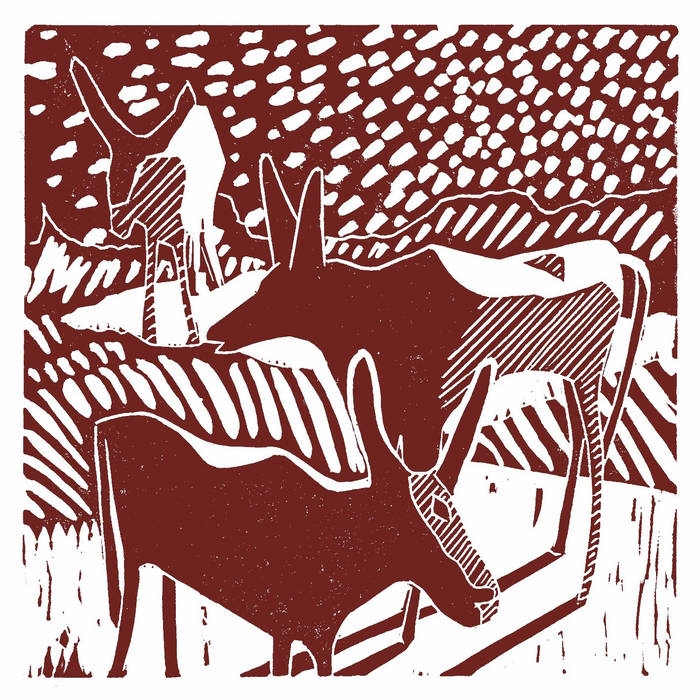 This week as part of Rusted Rail turning 10 its time for the The Big Eyes Family Players Band to surface on the RR Bandcamp page. Possibly the most avant-garde record I've put out on the label, it's also in parts one of the prettiest in that "soundtrack for the film playing behind your eyelids" style. Calling to my minds eye the Parisienne-Texan vistas of Wim Wenders or haunted spaces in the Australian outback, this is the most cinematic collection I've released so far on Rusted Rail. So sit back, press play, close your eyes and travel...

Not heard much from The Big Eyes Family Players recently and their brand of gentle, absorbing music. 'Donkeysongs' changes all that with a sweet 8 tracker on Irish imprint Rusted Rail. Beginning with 'Snowflake Runt', a tentative Bluegrass-esque musing underpinned with a melancholy reedy keyboard and shuffling percussion that's as disorientating as it is beautiful. It does indeed start to sound like a polyphonic mess, like many tunes playing at once, building gradually, barely keeping time but boy, once it grabs you and yanks you into its swirling universe of pattering tribal folk and subtle psychedelia, you're hooked. It's their sparing use of the human voice as an added instrument that gives these songs such an otherworldly vibe. 'Lavinia' is a little like Jack Rose with little analogue synth yawns and quiet voice intonations. 'Donkeys Disturbed By A Meteor Shower' is quite simply gorgeous, sideways experimental folk with real soul and a delicious homemade feel. 'Clunk Orm' is an eccentric piano piece accentuated with electronic mumbles, tumbling along like a drunken ball of playfighting mice. That's all i've time for, there's another 4 tracks of splendid pan European folk spanning Raga, Balkan, Parisian and traditional styles, embellished with goodness knows whatever comes to hand to create probably the best thing i've heard so far his first week of 2008 apart from the Animal collective album which is a fucking high benchmark, believe me!! Utterly wonderful! - Norman Records

A heady mix of guitars, harmonium, violins, drums, harp, kazoo, (yes, I did say kazoo and it actually works for a change), piano, recorder, water-bird-whistle organs and banjos mixed with loops all with slightly skewed time signatures could spell a recipe for disaster but as usual in their capable hands they have once again produced a thing of unsettling beauty. This is a little gem of an EP and has enough strange quirky, innovative use of sounds/loops and acoustic instruments to make it stand out from other similar fare. Highly recommended. - [SIC] Magazine

The reason you'll come to love this album is that it is so much more than your average experimental folk endeavour. Employing a combination of acoustic guitar led instrumentals and abstract atmospheric pieces, The Big Eyes Family Players conjure up images of vivid rural landscapes under red night skies - perhaps as seen through a donkey's eyes. The record is melodic but not overtly so, with an attention to compositional detail rarely seen on CDR releases. Take the stunning mystique of "The Orange Miller," which sounds like the lament of a remote ghost town. Or mournful "Donkeys Disturbed By a Meteor Shower," whose brilliant guitar/banjo melody is accentuated by its eerie bed of percussion. Of course, the guitar-heavy compositions consume a lot of my attention because their relative straightforwardness makes them more overtly memorable, but in truth Donkeysongs also offers several abstract pieces. "Clunk Orm," for example, is a brilliantly shimmering piano piece that employs reverse sampling to mysterious effect, and chilling "An Improvised Drowning" closes the record on a startlingly downtrodden note. These tracks add depth to an album that is uncannily mysterious and atmospheric. Taken together, Donkeysongs is a marvellously idiosyncratic journey that's worth taking. A stunning work of atmospheric and somewhat unconventional folk. - Indieville

Sheffield's finest purveyors of avant-folk chamber music return with their second album under their current moniker. In spite of the compact make up of the group, however, the swirling interplay and overlay of many tracks makes for a dense, psychedelic listening experience. It's an album built on shifting sands, where musical themes take hold then drift into the distance, and a single sound can transform the feel of an entire song. It all kicks off in great style with 'Snowflake Runt', which sounds like Tortoise let loose in a primary school's music room and has an ending so abrupt I leapt up to check the CD hadn't broken. This is quickly followed by the chilling beauty of 'Lavinia' and the breathtaking, intricate rural idyll of virtual title track 'Donkeys Disturbed by a Meteor Shower'.... there is a strange musical magic running through these thirty minutes, which deserves your attention. Open your ears. - Sandman Magazine

Throughout the recording, BEFP repeatedly tinker with rhythm, often underpinning their beautifully melancholic ballads with meandering percussive elements which lend themselves to something more akin to the avant garde than anything associated with traditional folk. However, they do their experimentation with one eye focused there while the other is fixated on melodic and more traditional concerns. Makes what I call 'finely cockeyed' music where walls melt away and time dissociates. Wonderful, really. 8/10 - Foxy Digitalis

Their sound is very much based in the more improv side of things now with references to the meandering sounds of the Rachels meets the slightly more avant-folk sounds of bands like the No Neck Blues Band: elements of eastern folk meets avant-garde neo-classical with lots of odd acoustic sounds swirling around in the mix. - Road Records

Original Press Release
==================
Rusted Rail is proud to welcome the Big Eyes Family Players into our community. This avant-folk collective started life in Leeds , England as Big Eyes back in 2000 with the intention of creating classical music without any real training or knowledge of the genre. The ensemble recorded four albums until 2004 when the group disintegrated and reformed as The Big Eyes Family Players. The new name held a new aim - more collaboration and experimentation under the chamber/folk blanket. Previous collaborators have included Jeremy Barnes from Neutral Milk Hotel/A Hawk and a Hacksaw, Rachel Grimes from Rachel's and James Yorkston. For "Donkeysongs" the trio of James Green, David A Jaycock and Chris Boyd conjured sounds from guitars, harmonium, violins, drums, harp, kazoo, piano, recorder, water-bird-whistle and organ, with the resulting folksongs and chamber compositions nestling comfortably beside pieces made entirely from looped material. This 5inch hand-stamped album is housed in a handmade sleeve featuring a lino cut by James Green.