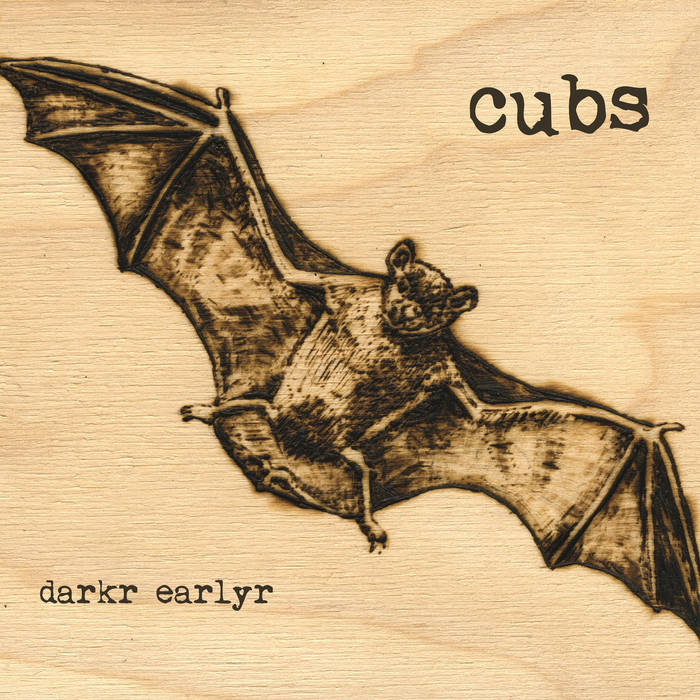 Rusted Rail is proud to announce the release of “Darkr Earlyr” by Cubs. The sophomore album by the left-of-field folky group has been gestating for a while but far from being a difficult second album, Darkr Earlyr emerges at a time when folk-influenced music is on the rise in Ireland again. Featuring members of A Lilac Decline, Phantom Dog Beneath The Moon, United Bible Studies, The Driftwood Manor and Loner Deluxe, the album veers from dream-folk mirages to more grounded acoustic songcraft, as the Cubs collective explore both the outer reaches of cloudy improvisation and groupthink rustic anthems. Backwoods progressions sit side-by-side with heartstring playing, as Darkr Earlyr combines fireside folk and stargazing songs.

"Winter. It's still a thing - just. It may be about twenty degrees in Leeds but it's dark at about 3pm and everything seems to have turned from colour into black and white. Best thing is to go inside, huddle next to a fire and do what I did on Monday night and bask in the television brilliance of Police Interceptors.

A nice time then for Irish collective Cubs to release a new album. We all know that the wind blows hardest from the west and the Galway coast is right in line when the latest American imported storm hits. The amusingly titled 'Darkr Earlyr' is a season appropriate collection of fire side folk songs featuring gently plucked acoustic guitars, whispered vocals, the odd clatter of percussion and spoken word interludes. What I like about Cubs is that they are folky without sounding too...um...folky. There's no traditional folk here, just late night strummings and pluckings that could bring to mind at various times the likes of Will Oldham, James Yorkston and Red House Painters. They are improved notably by the superb vocals of Cecelia Danell whose voice careens above the album elevating hearthside folk into something at times transcendental.

What I like about this 16 track album is that the standard 'song based' material are blended with instrumental interludes, spoken word sections, found sounds and shards of ambience leading the album to have a patchwork quilt quality where the next nice thing is just around the corner." - Norman Records


"Guess who are fans of Nick Drake then? Darkr Earlyr, the new album by the all-Ireland collective of folk-rock, indie, and experimental musicians, is a reference to the great man's 1970 album, just set at
a different time of day.

The collective have a strong Galway flavour, given its members include Galwegians Aaron Hurley (Phantom Dog Beneath The Moon ) and Keith Wallace (Loner Deluxe ), and Galway based Swedish artist
Cecilia Danell (aka singer-songwriter A Lilac Decline ), and the album is released on the independent, Galway based, record label, Rusted Rail. The remaining band members are folk singer-songwriter Eddie Keenan (aka The Driftwood Manor ), Scott McLoughlin (Phantom Dog Beneath The Moon ), and James Rider (United Bible Studies).

Throughout its 44 minutes and 16 tracks, the album delivers both instrumentals and songs, which strike a well aligned balance between the melodic, the atmospheric, and the experimental. As with
previous Cubs releases, Danell steals the show, with two thoughtful, haunting, and finely realised songs in 'October Skies' and 'Highwater'.

While 1960s and 1970s folk and folk-rock are predominant influences, elements of the Kosmische Musik strain of Krautrock are discernible, particularly on the gentle, and endearing, closing piece 'Burrow'. Overall Darkr Earlyr shows Cubs' increasing willingness to be accessible, yet without sacrificing strangeness." - The Galway Advertiser

"Comprising artists on Galway indie imprint Rusted Rail - Cubs‘ sedate and self-proclaimed “left-of-field folk” is equal parts phantasmal and pastoral. It’s improvisational, sylvan and snugly-woven approach that is laid bare on the group’s second album, the recently-released, Darkr Earlyr. A highlight from the release, ‘Swallows Will Be Leaving’ is a paean to nature’s passage into wintertide via the parting of hirundinidae from the skies." - The Thin Air

"For this album, which was recorded primarily in Ireland and Sweden, bar some fireworks in Berlin and a little piano and cello in Huddersfield, they have created a fine wintery album full of intimate, warm and fireside songs. The album title alludes to Bryter Layter by Nick Drake. The album starts with the ever so gentle instrumental ‘Embers’ before the skies darken and ‘October Skies’ hoves into view, here we are introduced to their secret weapon, the voice of Cecilia which reminds me a little of a cross between Judee Sill and Laura Veirs. ’Freezing Fog’ up next is like the theme tune of some ghostly western, with its lonesome harp refrain, I’m also reminded in places as the song develops, of early Tunng.

I won’t go through all the tracks, which would make this far too in depth as there are sixteen of them. I will highlight a few more though. ‘Deepest Woods’ a delicate, dreamy ballad of note imbued with various found sounds, this bleeds into ‘Kindling/Starry Plains’ creating a nice passage of music to drift off to, it has a few peels of thunder and it progresses into a widescreen instrumental, with some beautiful playing underpinned by cello. ‘An Echo in the Stones’ is an eerie, minor key piece, which tells of an impending nuclear winter. ‘When the Dust Settles’ is a folk noir instrumental, gently disturbing which us leads nicely into ‘Swallows will be Leaving’, this works well lightening up the proceedings a little, it’s a tangled summer moving into winter song, one of the album highlights for me. ‘Highwater’ immediately has me thinking of The Wickerman, starting as it does with a Jaw harp, it has plenty of atmospheric electronics, gradually bleeding into ‘Little Cave/ Howling on the Hill, placing us firmly into Alan Garner territory. ‘Beyond the Haunted Asylum’ is a little unsettling, before album closer ‘Burrow’ takes us far into the twisted woods, of dreaming in moss and stone.

Seek this album out; it will be a welcome friend in the winter, when it gets darkr earlyr." - Terrascope

For the record, Cubs were:

Audio capture, electrickery, production and mixing by Keith Wallace
Recorded in various homes in Ireland and Sweden, fireworks on track 1 recorded in Berlin,
Cello and Piano recorded by Scott in Huddersfield

Artwork and sleeve design by Cecilia Danell and Keith Wallace