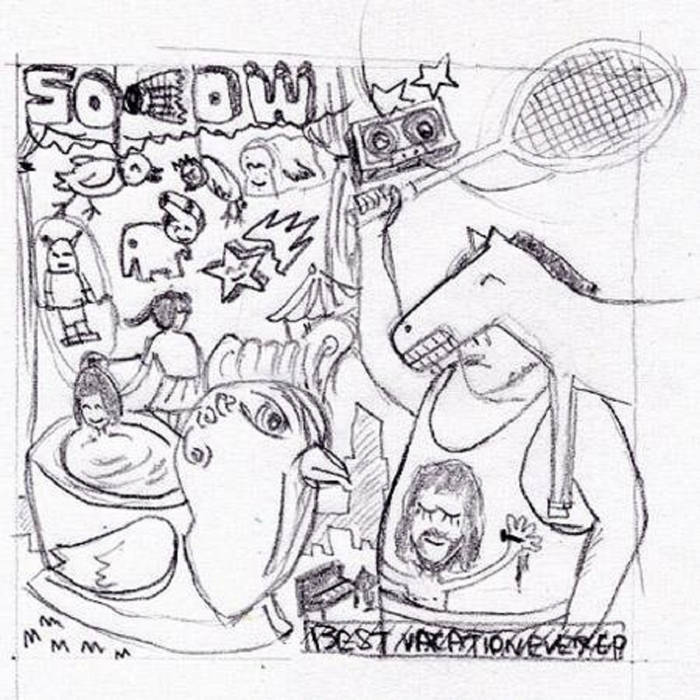 Obeying my vocation to fill up the Rusted Rail Bandcamp page with the gems from the Rusted Rail back catalogue now that the label has been established for 10 years, today its the turn of So Cow. All the way from Tuam, Co. Galway I first met Brian Kelly in November 2001 on the day that Michael Karoli from Can ascended to the great gig in the sky. We both showed up at college radio station Flirt FM at the same time, angling to get an interview (and thereby free admission) to a Smog gig that was on in the Roisin Dubh that week...we both ended up getting in but the monosyllabic Mr Callahan wasn't in the mood for talking into a minidisc recorder held by two college-radio fan-boys. We were hypnotised after watching Jim White's drumming anyways so we didn't mind. From then on we got to know eachother via the medium of babbling about music, white wine-enhanced kitchen-dancing to Can and farting around on malfunctioning 4 track tape machines. Brian then headed off to Seoul to TEFL and hooked up with a bunch of musical folks in cheap rehearsal rooms, playing even cheaper flea-market music instruments, recording all the instruments himself, including a cello he rescued from a skip and which features on a song on the EP that he recorded in a South Korean basement as So Cow in the winter of 2005. See if you can spot where it appears on this EP. This is the first time that "Best Vacation Ever" has been available in ones and zeroes. Hup!... Keith, Rusted Rail, September 2016

Original Press Release
==================
"So Cow could be described as "lo-fi with notions". Recording his songs onto eight track cassette in a basement in a flood-prone area of Seoul, South Korea, he continues on a quest to meld the finest of classic indie rock moves with a sprinkling of bullish audio experimentation...experimentation borne of the fact that he remains oblivious to such odd and frightening terms as EQ, Compression and Frequencies, preferring instead to twist the knobs and see what happens. This "record and run" approach has spawned a monstrous number of recordings, each weirdly special and especially weird. so cow has recorded music for years, sending out limited edition runs (we're talking ten copies at most) of his collections...although dabbling in one or two music groups, So Cow prefers the solo route, favouring the manual loveliness of playing, recording, mixing, mastering and burning all on his lonesome. and so it will continue. This EP was recorded in November and December of 2005, using expensive microphones (borrowed) and cheap instruments (found). So Cow is more than happy to be associated with Rusted Rail." - March 2006

All instruments, singing, songwriting, recording and mixing by Brian Kelly, with the exception of Jaguar Song which was written by Jaguar.

REVIEWS
++++++++
'Best Vacation Ever' by So Cow covers a lot of ground considering it's the work of one young Irish fella and his trusty 4-track recording device. Listening to 'Best Vacation Ever' is pretty much the sound of a man with a schizophrenic mentality toward songwriting and the an immense amount of freedom to explore different ideas due to his choice of recording technique. It's like listening to lots of different records compiled together but somehow So Cow manage to weave some kind of consistency into all the madness. So we get synth pop ditties, acoustic folk ballads, electric lo-fi pop and piano based sing-a -long's. There's also a track that sounds so much like Calvin Johnson it's hard to believe it's not some long lost mysterious Beat Happening B-side or maybe a cheeky cover. This record seems to have a little bit of everything for everyone so it's most definitely worth further investigation. Out now on the ultra reliable Rusted Rail records. -Norman Records

Brian comes from Galway, Ireland. Brian lives in Seoul, South Korea. These songs are mainly very short and sound quite distinctive in a good ole' fashioned 4 track bedroom punk pop (with a twist) kind-of-a-way. If you can imagine a halfway point on a bridge between Boyracer and Pumice, this might just be it looser than one; tighter than the other. There's some nice off key 'cello, wonky piano and what has to be a homage to Calvin Johnson too. Mmmm smiles all round. - Boa Melody Bar

This nine track ep is released on the new Irish label Rusted Rail, features a selection of lo-fi home recordings sounding a bit like the bedroom style little brothers of Sebadoh blended with the strange lo-fi folk sounds of the likes of Future Pilot a.k.a. and the weird outsider sounds of Daniel Johnston, the album was recorded in South Korea and county Galway, a mix of mellow psychedelic folk sounds and stop/start indie rock. - Road Records

An outlier in the equation, sonically and spatially (the man lives in Seoul), So Cow plays a variety of songs which do not intuit a single sound. The guy's all over the place, touching on a different landmark with each song in the way only 4-track freedom allows: there's strolling piano sing-along in "Introduction", synth-pop in "Sang Mi & Yu Mi", a nice guitar-ballad in "The Apologist". Influence is evident as well: "Tillage" sounds like old Destroyer, "Oh For Fuck's Sake" maybe a cheeky Rob Crow circa Heavy Vegetable/Thingy, and "Bat Toes" something Calvin Johnson. In all, an unexpected trip through the last decade of indie music by someone with plenty of songs in his head.
- www.animalpsi.com

"Introduction" - Well, it's the first song. Quite short. Drums and Keyboard, which is a combination that should be exploited more often. Recorded in Susaek, right beside the World Cup Stadium in Seoul. The keyboard part was written when I worked in a Kindergarten and had to keep 4 and 5 year old Korean kids amused during the 40 minute break. I would often do so by going nuts on the piano. Kids love stupid noises. In fact, if you put your ears even closer to the headphones, you can hear some children from that same Kindergarten shouting, presumably some immature nonsense.

"The Apologist" - I'll be honest with you. The lyrics were an afterthought. Something about surgeons removing someone's brain to stop him apologizing...maybe. I know I had a point at the time. This is often the case. Someone has sound it sounds like Love. The band, not the emotion.

"Sang Mi & Yu Mi" - A very old melody. Recorded in a rehearsal room in Hongdae, near where I work. The staff gave me a quizical look when I arrived, and a pitying look when I left. There wasn't enough riffage, I'm assuming. Sang Mi and Yu Mi were two students in my Conversation Class last year. Sang Mi since graduated and is now a jobseeker. Yu Mi is in her sophomore year and I occasionally meet her on campus corridors. She's in good form.

"Tillage" - Recorded in a kitchen. First recorded use of a cello. A minor triumph, considering I've never actually sat down and learned how to play the thing. Lyrics are pretty much nonsensical. Lyrics writing is the most difficult part of all of this. But we're saying "No!" to a rhyming dictionary.

"Regretsplatz" - Named because I like German sounding things, and I 'm a huge fan of remorse. Guitar instrumental. Those words would otherwise fill a man with horror, but it's quite short and quite sweet. Recorded in my bathroom at home, which is 5 foot 8 inches in height. I'm 5 foot 7. There was no rocking out.

"Jaguar Song" - A song by a Korean girl called Jaguar. The Korean title translates as 'Let's Start'...it's about eating ice cream, meeting up and generally having a good time. Deny that, and you're a fool.

"Frankfurt" - I've been in Frankfurt eight times, but only seen its Airport. Which is saddening. I'm told by someone in the know that it's a sordid shithole of a city. But it's always nice to see from above, surrounded by the Black Forest. A piano piece, recorded live to the internal microphone of an mp3 player while two Kindergarten teachers and four little children talked and screamed and educated behind me.

The EP was named on a KTX (fastest train in the world at 300 km/h) from Busan to Seoul on a Sunday evening. A set of lyrics were composed, but were guff.